The Deep and Sensitive Minke Whale

How can you not see the sensitivity and depth in the eyes of the minke whales. The minke is shy, and rather elusive weighing up to 14 tons. As the  smallest of the baleen whales, the minke is a filter feeder dining on krill, and small schooling fish like cod, and pollock. They are fast swimmers,swimming up to speeds of 24 mph. They reach maturity at 7 or 8 years of age. The females carry their babies for 10-11 months, and their babies nurse for 6 months much like humans. The females swim closer to the shore than the males. The minke’s travel in small groups or alone. They have complex family bonds, and communities. They speak a complex dialect and are famous for vocalizing the “boing”.

Unfortunately for the minke whales of 2011, they are a target of commercial whaling, “Only in recent decades have minke whales been taken by whalers to any extent; they were thought to be too small to be a worthwhile catch. But as the larger whale species became depleted, the whalers began to hunt the minke as a replacement. Since the late 1960s and 1970s, Japan, Russia (which has now ceased whaling), and (to some extent) Norway have focused their whaling efforts on minke whales”, “American Cetacean Society http://www.acsonline.org/factpack/MinkeWhale.htm. ” Because they had already  driven the huge whales like the sperm whale to the brink of extinction, the whalers switched their focus to the smaller minke whale where it remains today. 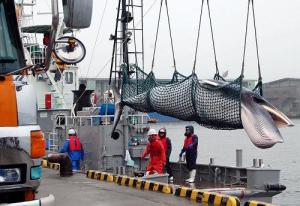 On April 26, 2011 three so called, “research” whaling ships left the ports of Kushiro and Hokkaido. The thirty member crew had received a permit to harvest sixty minke whales for research purposes. In the name of research the Japanese will end up with approximately six hundred tons of minke whale meat.

This Minke Whale sashimi was slaughtered in the name of research.

The hunted whale has a violent awakening from its quiet life.”Even using ‘modern’ methods – which have changed little in 100 years – whale hunts often involve prolonged and intense suffering. The hunt often begins with a pursuit lasting hours, until the whale slows from exhaustion.Once in range, hunters fire an exploding harpoon. This is intended to pierce the whale’s body to a depth of 12 inches before detonation.Sea swells and movement of the boat and whale make a single lethal shot almost impossible.Even if on target, the harpoon rarely kills instantly. Instead it causes massive shock and injury. Inaccurate shots are followed by secondary harpoons and rifle fire.Hunters winch the injured animal onto their boat. At this point, it can be unclear whether the whale is dead – they can store vast amounts of oxygen and shut down all but their essential organs.The whalers’ criteria for judging when a whale is dead are considered inadequate by theInternational Whaling Commission. This means whales may still be in pain even when recorded as dead. Whalers frequently claim that a whale dies within two minutes. WSPA has proof that the death throes can last over an hour.”http://www.wspa-international.org/wspaswork/whaling/aninhumaneend.aspx

Until Japan voluntarily ends their insatiable desire  for whale meat the minke whales future is bleak.

WHAT YOU CAN DO:

Email the Prime Minister of Japan Nato Kan. Let him know you will not support Japan if they won’t stop murdering cetaceans. By Law the Japanese government must respond to all emails. This is a direct link to his comment page.

Please Support the Sea Shepherds, The Cove Guardians, Save Japan Dolphins, and Wdsf/Prowal. Together we can make a difference.