The famous whale and dolphin defenders Juergen Ortmueller-Wdsf and Andreas Morlok-ProWal Sheet Pilings are continuing their efforts to close down  cruel dolphinariums worldwide (known in the U.S. as aquariums, marine amusement parks, dolphin assisted therapy) that plague so many countries.
They are no strangers to dolphin and whale advocacy. In August of 2010 they managed to infiltrate themselves into the ranks  of the Faroe Islander’s known for their brutal pod genocide of dolphins each year. Using hooks and knives the Faroe families, cheerfully, murder 1000’s of intelligent, sensitive pilot whales,their babies, and other dolphins during the summer birthing season when currents carry the traveling cetaceans by the Faroe Islands.

The two activists managed to take boats and plant pings that imitated orca’s, a predator to the pilot whales. The pilot whales changed their course, saving their lives thanks to Wdsf/Prowal.
Today, Juergen Ortmueller Wdsf  and Andreas Morlok  continue the protest of  dolphinariums. Dolphins, baleen whales, Seals, and walruses languish in small cement pools. Many of the dolphins in  dolphinariums have been procured from Taiji, Japan famous for it’s horrific dolphin drive.

The blood dolphins of Taiji have gotten their name from their origin. Every year the Fisherman’s Union of Taiji (FU) consisting of 26 men brutally slaughter up to 25,000 dolphins off the coasts of Japan.

The dolphins are driven into the cove using banger boats. The fisherman locate a pod of dolphins and then surround them. They drop metal pipes into the water around the dolphins and begin beating on the pipe driving the dolphins into the bay with boats, where they are trapped with nets, and remain until the next morning when the slaugher begins, “The killing of the small cetaceans used to be done by slitting their throats, but the Japanese government banned this method and now dolphins may officially only be killed by driving a metal pin into the neck of the dolphin, which causes them to die within seconds according to a memo from Senzo Uchida, the executive secretary of the Japan Cetacean Conference on Zoological Gardens and Aquariums.[11] It is not clear if this ban is strictly enforced however, as eyewitness reports of similar throat-slitting and evisceration style killings were reported as late as October and November 2006.[12] http://en.wikipedia.org/wiki/Dolphin_drive_hunting

During each dolphin drive the dolphin trainers come down to the cove and select juveniles that will then be sold into captivity. The blood dolphins as they are known, endure a terror like no other. One by one they are forced to watch their parents, siblings, and community led under the blue tarps of death. Cries of fear, terror,pain and blood flood from under the tarps, filling the cove with the sounds and smells of death. Following the drive the dolphins are kept in harbour pens, some transported to the horrific “Whale Museum” until they are shipped to a life in a  small concrete tank far from the rhythms of the ocean. 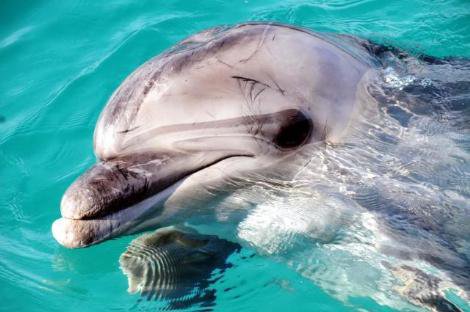 A dolphin in Bodum

A moving account by Andreas Morlok-ProWal, “I met this dolphin in December 2010th It was imprisoned in a concrete – glass tank with a few dolphins in the “whale museum in Taiji, Japan.It lived with its family, a pod with over 100 animals in the open sea in front of the Japanese coast a few days before. While it jumped into the air, it enjoyed the sunrise and cavorted and played with its pod.
Its whole family is dead. The whole pod was rounded up and herded into a bay by emotionless monsters, they call themselves fishermen. All animals, one after another, except that single dolphin, were murdered in cruel way to unimaginable.They were stabbed with knives and hooks. They wriggled, cried and died a long death. I saw a baby dolphin Which cried heart-rendingly when it swam beside its dead mother in the blood-red water. Murderers in diving suits pressed the baby under water, so until it was dead.
It was one of many days of battle in this month. The killers laughed and ate their breakfast on a boat beside the dead dolphins – some animals were not dead yet, they were badly injured and thrashed when they were brought to the slaughterhouse.
Only this single dolphin was spared because it was a beautiful young female. It was selected from a dolphin trainer from the dolphin industry. The future of the dolphin is the captivity in a dolphinarium. I looked at the dolphin in this glass tank for a long time and it came to the window where I was filming it. It looked at me and was interested in my camera. I turned the monitor around and the dolphin came with its eye close to the window. It Recognised itself. It swam more than a dozen times up to me and over and over again it wanted to see itself in the monitor of the camera.
What a dreary life, this animal will have. Never again it will have a family. It will never see the sun. No more chasing fish. Isolation in an artificial world, disco music, disease, hunger and show are waiting for the animal, until its death.
What did it do that it have to amuse crowds in a primitive and selfish miserable dolphinarium under the worst conditions?
To the dealer dolphin, dolphin dolphin murderers and exploiters in the dolphinriums and centers for the dolphin assisted therapy: You have no respect for nature! With your short term and purely commercial aligned actions you help to Ensure that the future generations Do not have enough biodiversity for their own existence! You have no more perverse legitimization to carry on your business with animals!
No matter where you are – you want to meet me everywhere and I will fight until my last breath to stop your barbarian action. That’s a promise! Photos of Juergen Ortmueller Wdsf in 30. März 2011
By Andreas Morlok-ProWal

Thanks to Juergen Ortmueller-Wdsf and Andreas Morlok a Bodum dolphinarium is closing. Today they are in Germany protesting dolphinariums. They need all of our support to continue their brave efforts to rescue dolphins and marine mammals from slow deaths. These are true Champions for Cetaceans that are getting things done. Please help them with support they are in Germany today fighting for the dolphins and marine mammals we love.

Now another success in Germany,
“Munich, 26 May 2011: Today, the Bavarian Administrative Court decided that representatives of the international Whale and Dolphin Conservation Society WDCS gain complete access to information, the dolphin attitude in Nuremberg Zoo on.( http://www.wdcs-de.org/news.php?select=978)