A Dolphin of Taiji

Today, dolphins are known to be highly intelligent, and self-aware beings with brains comparable to mans. Every day more scientific data is compiled on how similar dolphins and humans really are. They carry their offspring for about the same amount of time and nurse their young for as long as 2 to 3 years, the pilot whale as long as 6 years. Dolphin groups known as pods live in socially complex societies consisting of families, that show advanced cultures and traditions. Dolphins have interacted with man since time began, trying to help when ever needed, to reach out and share their many gifts of love and laughter freely.

A Boat Loaded With Wounded, and Dying Dolphins Heading For The Slaughter House

September 1st marks a sad days for the dolphins swimming near the coast of Taiji, Japan.  As exposed, by the academy award-winning film, “The Cove” the traditional practice of driving pods of dolphins into the blood cove continues. Each year up to 20,000 dolphins are murdered in Taiji Japan. The Taiji dolphin hunters confuse the dolphins using a wall of sound created by dropping metal pipes into the water and then tapping on them. Once the dolphins sonar is rendered useless, the hunters drive the pod into the cove using boats. The pod is separated, the attractive young netted off from their parents, family and community. These young dolphins, are forced to hear their families brutally slaughtered while they swim in their blood. The selected juveniles dolphins are trained and sold into captivity upwards of $100,000. Once sold, they are packed  in ice and shipped worldwide, destined to spend their lives in small cement tanks forced to perform for their food. Their lifespan shortened by as much as 95%, most die within the first year.

The dolphins are left in  netted pens overnight. The  hunters return the following morning to begin the slaughter. 26 sadistic men, savagely murder the remaining dolphins, the death toll rising into the hundreds and thousands. Their thrashing bodies, and cries for mercy echo through the cove as  entire communities of dolphins, their traditions, their sparkle, their love, gone forever. The dolphin drives of Taiji are big business for the Fisherman’s Union of Taiji. The dolphin captivity trade for marine parks and aquariums supports the cove killings. This is income the hunters,  are not willing to give up regardless of the dolphins suffering, so clear to the world.

The Japanese people now know that the dolphin meat served to their children in public schools is tainted with high levels of Mercury and toxins from Fukushima Nuclear Power Plant. They too are rising against the Japanese Government, and the Fisherman’s Union of Taiji demanding they stop poisoning the children of Japan.

Taiji was not affected by the tsunami although it experienced some high swells. The hunters of the Fisherman’s Union quickly jumped into their banger boats and headed out to sea leaving the dolphins locked in Harbor pens. As the water rushed on the shoreline the dolphins were rushed over the jagged rocks. Twenty six captive dolphins perished. 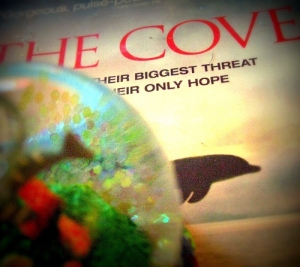 The world is calling for change

On September 1st, 2011 the people of Portland, Oregon will join the world in asking Japan to stop issuing permits to slaughter dolphins.

All Oregonians and visitors please join us as we stand up for the dolphins of Taiji. Be part of the biggest movement on the planet, saving the oceans, and saving sentient, self-aware beings, the dolphins.

Detail about the rally are listed below. The rally begins at 1pm and will run from 1pm to 4pm in front of the Wells Fargo Center, in downtown Portland.