As anti-whaling day unfolded people around the globe stood up and spoke out about saving the whales. Today scientists have proven that cetacean brain size is equal to that of man’s, and that in some ways whales and dolphins maybe even more intelligent.“Bottlenose dolphins have convincingly demonstrated that they use a mirror to investigate their own bodies, showing that they have a sense of self (Reiss and Marino, 2001). These findings are consistent with further evidence for self-awareness and self-monitoring in dolphins and related cognitive abilities (see Marino et al, 2008, for a review). In particular, the highly elaborated cingulate and insular cortex in cetacean brains are consistent with the idea that these animals are highly sophisticated and sensitive in the emotional and social-emotional sophistication not achieved by other animals including humans.

All of the above factors provide cause for concern over the vulnerability of whales and dolphins when placed in stressful situations, including capture, drive hunts, and the disruption of social networks. Moreover, conservation measures that do not take into account the psychological complexity of these animals will do little to alleviate suffering on an individual level. Beyond our scientific understanding, our current knowledge of cetacean brains and cognitive abilities demands we develop a new ethic of respect and coexistence with them” (Phillip Brakes and Mark Peter Simmonds, Whales and Dolphins Cognition, Culture, Conservation and Human Perceptions, Washington, DC, Earthscan, 2011). 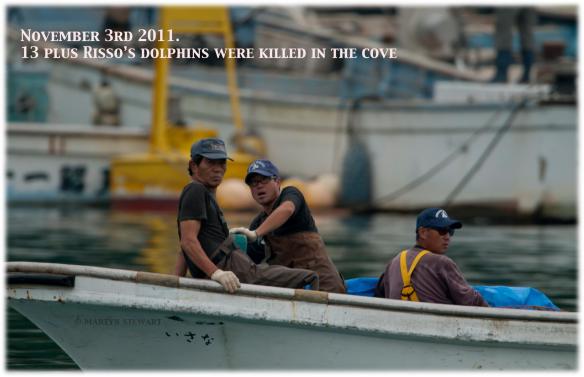 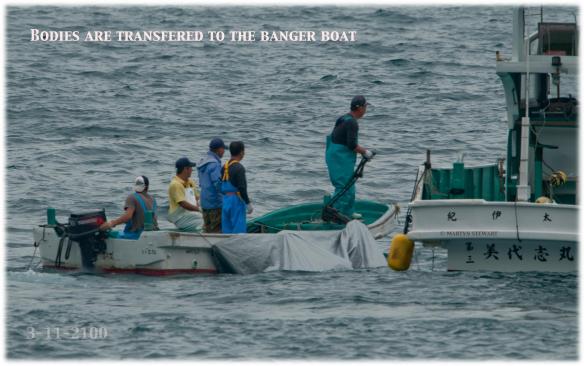 With all of the science supporting dolphin intelligence, and love for dolphins worldwide it makes the daily slaughter of our brothers and sisters of the sea seem so distorted and out of step with the rest of the world. Activists cannot help but wonder what drives these men on day after day as they pick up their knives, harpoons and bamboo nails only to hide behind their tarps where they dominate, and destroy our ocean friends with such cruel intent.

The dolphin hunters have gone to great lengths to hide their killing activities yet this year more footage of the killing cove itself was obtained  from a concerned citizen of Taiji undoubtedly afraid to speak out.  http://soundofcritters.com/archives/1543 This year the killers have built walls so the watchful eyes of the world cannot see the beloved dolphins die a slow death lasting 7 minutes or more. Thanks to activist Dieter Hagmann the world now knows how sadistic and horrific a dolphins last moments are in the killing cove.

Killing Dolphins at Taiji is Slow and Cruel from BlueVoice.org on Vimeo.

13-15 Risso Dolphins murdered on November 3rd, and now again, two days later on November 5th another Risso pod of 10 dolphins have been driven into the cove without any mercy as noted by Martyn Stewart:

“Waters run red in the cove, not sure of the numbers but up to 10 risso’s dolphins have lost their valuable lives in Taiji today. My heart flies at half mast, how much longer do we have to endure this barbaric nature. We will run out of dolphins before they will stop but we must continue this valuable fight”.

The small group of activists on the ground bravely bare witness to the pain and suffering of the dolphins. Activists are calling for more volunteers on the ground in Taiji. They need your help. Do you have what it takes to join this movement and stand up for the dolphins in Taiji?

“You walk through the shadow of death here and you feel evil everywhere. People of Taiji and Japan knows exactly what is happening here make no bones about it. Instead of looking at what purpose we are here for I get looked at as though I’m instigating a terrorist attack. Our souls have been destroyed here today but they will replenish for the fight tomorrow. We need people on the ground here desperately or we can just say goodbye to an amazing species”.(Martyn Stewart, 11/03/11)

Since the dolphin slaughter began September 1st approximately 91 Risso Dolphins have been  slaughtered in The Cove. They are one of the dolphin species that has insufficient data about their populations. This season several mothers and babies have been brutally slaughtered. Risso female dolphins have babies less often than humans. They carry their babies for 12 months and their babies stay at their mothers side for many years to learn social, and hunting skills. The dolphin hunters have no mercy for mothers or babies. The dolphins are forced under the blue tarps of shame where even children meet a gruesome death at the end of their sharp knives. Their’s is a sadistic cruelty, a desire to dominate, and destroy that is rarely seen or understood.

How long these killing will continue depends on several factors the most important being the captive dolphin industry. For every thousand killed 100 are sent to dolphinariums worldwide. Aquariums, swim with dolphin programs, and places like SeaWorld may seem benign but in fact they keep the vicious cycle of slaughter going as live dolphin trade continues to grow.

Take Action! Get active through social media, spreading the word, contacting embassies, and participating on Dolphin Awareness day September 1st. Tell your friends and family about the movie, “The Cove”, http://topdocumentaryfilms.com/cove/ and “A Fall From Freedom” http://afallfromfreedom.org/view-movie. Also, to learn more read Hardy Jones, “The Voice of Dolphins” learn more about the dolphin drives and the Mercury and PCB’s in the dolphin meat http://www.amazon.com/Voice-Dolphins-Hardy-Jones/dp/1456377531/ref=sr_1_1?s=books&ie=UTF8&qid=1320549260&sr=1-1. We must convince Taiji and the world that the dolphins have a right to travel by Taiji safely without fear of being dragged to their deaths into the blood cove. Dolphins have a right to be free. Not everyone in Taiji supports the drive fisheries it is actually a small group of  26 fisherman and 13 boats. We must keep fighting to save the people of the sea before it’s too late for cetaceans, and our oceans.

8 thoughts on “Dolphins Fought Bravely for Their Lives”