Update on Jiyu Via: Pic A. Dilly
The poor sick dolphin jiyu at dolphin base “swim with” in taiji is gone and feared dead as there was a dolphin killer here when we arrived.
These trainers told the police they “love” dolphins–but this is how they solve a “problem dolphin”. –by selling him to the killers for meat?

Update Via Rosie Kunneke  We are at the dolphin resort/base now. We cannot see Jiyu anywhere.I saw a dolphin killer here yesterday and when we arrived here earlier, there was a dolphin killer hanging around. We suspect that Jiyu was killed…..he was the most depressed, unhappy, sad, skinny and neurotic dolphin I have ever seen…he was the true reflection of the horrors and cruelty of keeping dolphins in captivity….Jiyu we will never forget you or the message of cruelty of captivity you send to the world….a lot of people fought really hard for your life…I hope you find peace(where ever you are) and release from the pain humans inflicted on you…..thank you to everybody that answered the call to try and save/help this dolphin by contacting these horrible people and begging for his life and freedom…

Taiji, Japan is the modern-day Auschwitz for Dolphins. Each year over 2000 dolphins are driven into a cove by disabling their sonar with deafening sound. Once netted off in the cove trainers come from the Whale Museum. Dressed in wetsuits they enter the water to select dolphins for captivity. This selection process is brutal. Juveniles are ripped from their mothers sides. Many dolphins have drowned as the trainers tackle them in the water. Once selected they are kept netted off from their pod. The dolphin hunters then drag the rest of the pod under the blue tarps of shame where they die unspeakable deaths at the hands of the killers, their suffering lasting almost 10 minutes. The Japanese government claimed the dolphins die within seconds but thanks to Dieter Hagmann’s revealing secret footage that follows the hunters under the blue tarps of death and shame the world can see why the killers go to such great lengths to hide their dirty work. The film revealed to the world dolphin suffering so cruel beyond imagination.

Killing Dolphins at Taiji is Slow and Cruel from BlueVoice.org on Vimeo.

Photos Provided by Martyn Stewart”They say they love dolphins but I see them sitting in the cove watching the slaughter, They pat the ones in the dolphin pens for show, These guys have no shame…”(Martyn Stewart, 11/5/11, Taiji)

See the trainers website http://wave.ap.teacup.com/rajya/. It is called “Our Life”. I would ask them what about the lives of the dolphins? When do they start counting?

The dolphin trainers at dolphin base are not your usual young people in their twenties and thirties, full of life, hoping to make the world a better place. Somehow their world has become dark and distorted. Current scientific findings revealing brains the size of mans, and  superior intelligence in dolphins means nothing to the trainers. In Taiji dolphins are seen as no more than a commodity, dead or alive.

These young people may have become dolphin trainers for the glitz and sparkle but the world can see they are far from it in Taiji. These supposed “trainers” are in fact no more than soldiers in a death camp, who are abusing the inmates, and then showing up for the executions. In no way does their behavior suggest that they care for the dolphins. Instead they exhibit a perverse desire to dominate, and oppress, these gentle beings. Much like the dolphin hunters the dolphin trainers show no sympathy toward their charges. Their days are spent visiting the outdoor sea pens where their job is to break the will of dolphins that have already experienced such tragedy. These dolphins have watched their parents and family murdered.  They have swam in the blood of their families sometimes for days. Trapped in tiny pens with three to four other dolphins the trainers use food deprivation as a way to break their spirits. Some dolphins become so hungry, and stressed they have eaten plastic and garbage. 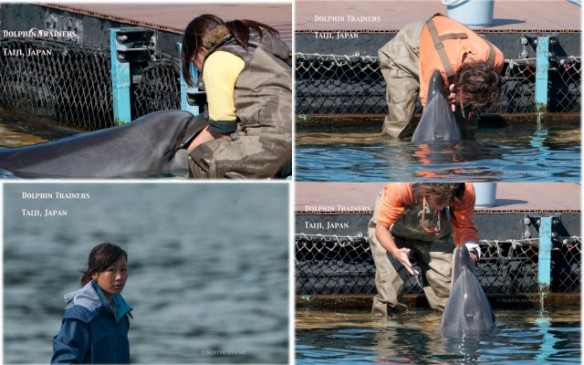 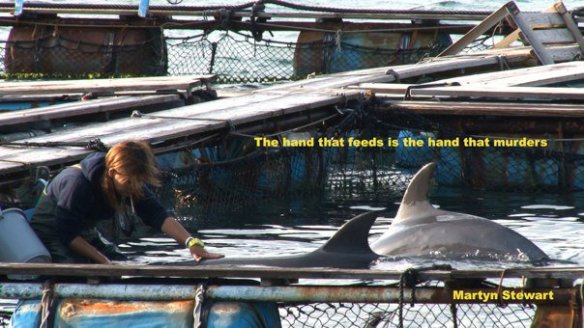 The brave photographer who took these shots Martyn Stewart,  had a special message for the dolphin trainers that have taken such a dark path in life.

I constantly tell the trainers that they have blood on their hands. If they ceased what they do, it would help put an end the demise of a species. Use your skills to educate others, If you loved dolphins you would stop the dolphin trade and the blood that spills in the cove. (Martyn Stewart, October 8, 2011) 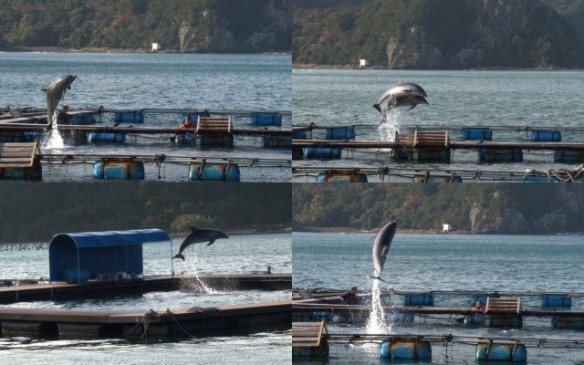 Photo Provided by Martyn Stewart Shouldn't They Be Free?

We can only hope that the dolphin trainers of Taiji will see the light and turn away from the cruel and dark path they have chosen, exploiting dolphins. If only they could see  how much more valuable our friends of the sea are swimming free with their families. They are so willing to work with man and share their gifts!

Japanese dolphin drive industries are supported by the dolphinariums, swim with dolphins, and aquariums worldwide. For every 100 dolphins slaughtered one to two are taken for captivity. Each day more and more marine parks are being built. The many middle eastern countries are adding them at exponential rates building whole communities around tiny dolphinariums stocked with dolphins from drive fisheries.

A Sick and Distraught Taiji Dolphin in Bodum, Turkey who once swam free Photo Provided by WDSF-ProWal

The life span of the Taiji dolphins in captivity lasts 5 years at the most, with many dying within the first two months of capture. Please take the pledge to boycott all marine aquariums, and dolphinariums!

Take action  and help us save the dolphins that travel past Taiji, Japan:

What can you do? Tell your friends to watch “The Cove” for free online: http://topdocumentaryfilms.com/cove/ or have them watch “A Fall From Freedom” also online for free http://afallfromfreedom.org/.

Follow any of the links below to get involved in saving the dolphins that migrate past Taiji:

16 thoughts on “Auschwitz for Dolphins”