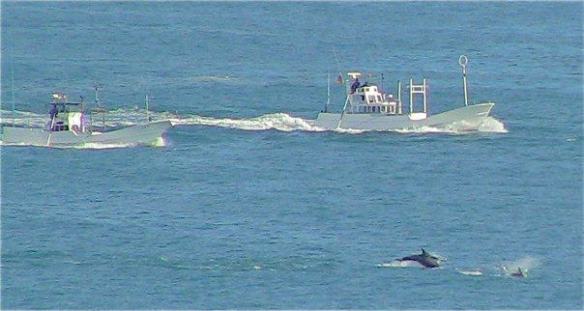 Taiji, the city of dolphin tears, brings another day of sadness and terror to dolphins driven into “The Cove”. On November 13, 2011 a pod of twenty risso dolphins with two rough toothed dolphins migrating together were detoured by the deadly dolphin hunters of Taiji. The pod fought hard for their freedom. For eight long hours the banger boats chased the dolphins banging on metal poles in trying to disable their sonar. Once the pod was driven past the harbor entrance and into the cove the killers made fast work killing ten risso dolphins in front of friends and family that had traveled together. Following the brutal slaughters of their loved ones the remaining pod huddled into a small knit group. Shock had set in. The cruel  dolphin hunters then fired up their banger boats driving the shattered pod out to sea. They did not have a permit to kill the two rare rough toothed dolphins and they had their glut of meat from the risso dolphins already slaughtered. Heather Hill activist on the ground in Taiji wrote a poignant post last night entitled, “Where are you now?”  after the slaughter, “And where are you, Taiji dolphin killers? In the comfort of your home, surrounded by your family? Will you even give a second thought to the family you destroyed just hours ago as you lay in bed tonight? Or will you sleep soundly, a belly full of dolphin, ignorant to the sufferings you’ve caused? You should be the ones mentally tortured right now, not the dolphins. Such a disgrace. Your actions make me embarrassed to be a part of the same species as you.”

RIP to the ten Risso dolphins murdered, and sadness for what lies ahead for the shattered pod. They must have been numb and grief filled beyond human understanding. “The highly elaborated cingulate and insular cortex in cetacean brains are consistent with the idea that these animals are highly sophisticated and sensitive in the emotional and social -emotional sophistication not achieved by other animals including humans “(Phillip Brakes and Mark Peter Simmonds, Whales and Dolphins Cognition, Culture, Conservation and Human Perceptions, Washington, DC, Earthscan, 2011).

The hunters have tried to hide behind the blue tarps of shame, whether killing, or transporting the wounded to slaughter. But thanks to the watchful eyes on the ground Rosie Kunneke, Leah Lemeiux, and Heather Hill their dolphin killing has been reported to the world. If watchful eyes had not been there would the remaining risso dolphins and the two rare rough toothed dolphins have been spared? Save Japan Dolphins Leah Lemeiux commented on the efficacy of activists witnessing the carnage, “One of the most respected cetacean conservationists in Japan has just told me that they probably would have killed those roughtooth and rissos dolphins if our little group hadn’t been there documenting and making a fuss and posting–and all of you out there making your calls!”

Join us as we take action to end this tragic slaughter of higher beings. Thousands of people worldwide are joining the movement to save the dolphins that travel past Taiji. Activists on the ground working with social media groups like Save Misty the Dolphin on Facebook https://www.facebook.com/Savemistythedolphin take the media provided by volunteers on the ground and take action, calling embassies, sending emails, writing letters, and educating the public through blog postings and social media platforms like Twitter using hashtags, #dolphinproject, #tweet4taiji, #SeaShepherds making people aware of the dolphin slaughter, and the captive dolphin industry that is at the crux of the situation, http://www.examiner.com/animal-advocacy-in-washington-dc/coalition-urges-trainer-organization-to-take-a-stand-against-taiji-dolphin-cull#ixzz1dPHmW6Z2

Please join us as we fight to end this terrible loss of dolphin life. The dolphins have gifts they want to share with mankind. Isn’t it time we recognize cetaceans for the higher being they are.

What you can do:

Boycott all aquariums, dolphinariums, swim with dolphins and dolphin therapy. The dolphins belong in the ocean not small cement tanks. Dolphins in captivity live only a tiny fraction of their lives compared to a dolphin living free in the ocean.

Watch the Cove for free online or tell a friend about it: http://topdocumentaryfilms.com/cove/

Watch A Fall From Freedom or tell a friend about it:

Visit any of these links and please join the cause saving dolphins, whales, and our oceans.

Together we can make a difference!

14 thoughts on “Taiji the City of Dolphin Tears”