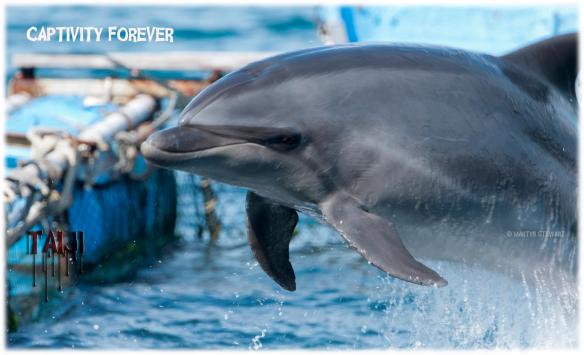 As the Christmas holidays are upon us the dolphin hunters of Taiji continue to give the gift of death to dolphin families traveling by Taiji’s dark and dangerous coastline. Almost everyday pod after pod of dolphins have been driven into the bloody cove where they have been mercilessly slaughtered by 26 sadistic killers.

Dolphin activists had hoped that the dolphin hunters would quit early on December 20, 2011. The world of dolphin conservationist’s were still mourning the terrible deaths of two striped dolphin pods driven into the cove two days in a row and the arrest of an innocent activist on the ground in Taiji. In her post “9 Days, 7 Slaughters” Cove Monitor Heather Hill recounts a dolphins last cries, “One of the last living dolphins let out a very loud and unnatural scream that echoed throughout the Cove, piercing my heart like a knife. It sounded a bit like captive dolphins when they are told to vocalize, but with so much more pain and fear behind it.”
http://myporpoisedrivenlife.blogspot.com/2011/12/taiji-take-two-9-days-7-slaughters.html

On December 20th when 10 banger boats headed out to sea thousands of people began hoping the hunters would come back empty handed. When the 11th, and 12th boat headed out to join the rest it seemed apparent that dolphins had been spotted and the drive would begin. Activists on the ground in Taiji looked to the horizon watching for the banger boats to move into drive formation. Then the pod was spotted, “SeaShepherd:  Taiji: A pod of dolphins being driven north toward Taiji. Still a distance away. Could be a bad day in Taiji”. The news the world had been dreading came about. A pod, a family, of bottlenose dolphins with one juvenile were being driven into the cove. Unlike days before where slaughter began immediately the pod was netted off overnight without food in shallow waters to await their fates at the hands of the hunters, and the trainers of Dolphin Base. Sea Shepherds tweeted, “Taiji: Pod is very agitated. Now jumping and spyhopping”. The nervous pod had a long night ahead.

Trainers arrived, Via Sea Shepherds, “Taiji: dark at 6 am, preparations underway for the insanity that is soon to occur. Trainers are standing by to destroy lives.” The hunters arrived shortly afterward, with their gift of death aboard the skiff. Sea Shepherds, “Taiji: several skiffs full of killers and trainers have entered the killing cove. Dolphins have been pushed into killing cove.”
Activists emailed, called The Japanese Embassies worldwide, and the Fisherman’s Union in Taiji, begging that this dolphin family be given the Christmas gift of release and freedom. The famous martial arts champion Enson Inoue appealed to Dolphin Base that mercy be shown to the dolphins. Unfortunately, this would not be the case. The pod was shattered as dolphins were selected and reports came out 4, 6, 8 selected. The last tweet from the Sea Shepherds Cove Guardians, “Taiji: total 10 dolphins taken captive. No underwater sounds from the remaining 11-15 in the pod. Presumed killed.”

The dolphin hunters have made yet, another Christmas holiday tense and ugly for the town of Taiji. A family of dolphins traveling past Taiji Japan was forever destroyed on December 21st, 2011. The hunters think they can now just rinse the blood of innocent dolphins off their hands, and white shiny boots, and go about celebrating the holidays. As they go on to their warm houses, and ring in Christmas and the New Year the surviving bottlenose dolphins are forced to deal with the loss of their families, adjust to a life of imprisonment, and endure the trauma of watching their family murdered in the bloody cove.

The dolphin hunters want to seen as “Fisherman”. They want the world to see them as fathers and husbands who care and love their community and families. Unfortunately, they will never be seen as anything but dolphin killers, cruel and sadistic. At a time when science knows how amazingly intelligent dolphins are the inhumane treatment these gentle creatures get in Taiji is deplorable and unacceptable. The dolphin hunters of Taiji have created their own modern history which has been caught on film in photos for years now. These are the images people will remember about Taiji, panicked dolphins being kicked off the rocks, drowned, speared, and slaughtered, suffering for up to 7 minutes while the cruel killers sever their spines and slowly carve them up while still alive as seen the famous Dieter Hagmann video: http://vimeo.com/28720693.

Dolphin hunting is indeed a dying business. The meat is poison, the killing inhumane beyond imagination, and the captivity that pays for it all can hardly be called traditional. The gift of captivity and death to this pod of bottlenose dolphins will not be forgotten. The dolphin killers can pretend to lead normal lives. They can try to show a rationale face to the world of men who can care and love, but the world has seen who they really are. They have twisted Taiji’s history and brought shame upon Japan this holiday and everyday they continue their inhumane and cruel hunt of the people of the sea. The dolphin killers know they are hated by the world and with good reason. They know they are called monsters of death, and with good reason. Sadly, that is how they will be remembered.