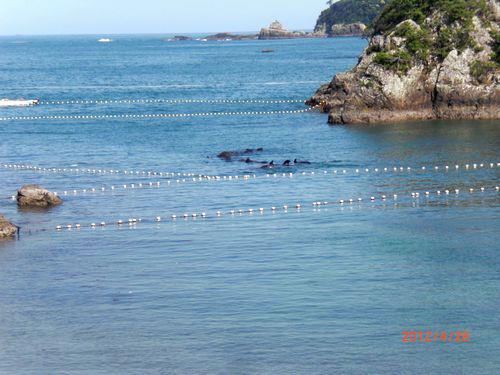 “A friend of the dolphins has some sad news. There was a drive hunt on April 28th. 20-30 short-finned pilot whales were captured, several taken to captivity and the rest killed for meat.”

The world continues to buzz about the town of Taiji Japan’s recent announcement that they plan to create a, “Whale Ranch” where dolphins and whales are “raised” and used for swim with dolphins, and cetacean research. “Taiji, Wakayama Prefecture, known as the town of whaling, which envisions a “ranch whale” to free-ranging whales and dolphins in charge with a net Moriurawan part of the town. The main purpose of attracting tourists and ecological studies”. Source

As reports of the planned “Whale Ranch” poured in “A friend of the dolphins” brought back the glaring reality of how the coastal town of Taiji treats whales and dolphins. 28 to 30 beautiful pilot whales were driven into the Cove where some were taken captive and the rest brutally slaughtered.

The slaughter of dolphins in Taiji was made famous in the academy award winning documentary “The Cove”.  Ric O’Barry, producer Louis Psihoyos and their team went undercover to expose the cruel dolphin drives of Taiji, Japan. To capture the dolphins the hunters use a technique called Oikomi or “dolphin drives”. They create a semi circle around a pod. They then beat on metal pipes that extend into the water creating a wall of sound. As the dolphins try to get away from the painful noise the hunters drive them into a shallow cove where they select dolphins for the captive industry and then slowly slaughter the rest using a technique called pithing. A metal blade or rod is driven a fist length behind the blow hole in an attempt to sever the spine. They then pound a wooden peg into the wound to impede the blood flow into, The Cove. Here is unseen video by another brave friend to the dolphins Dieter Hagmann that proves dolphin suffering beyond imagination.

On May of 5, 2011 just one year before another pod of pilot whales was driven into “The Cove”. Brian Barnes of Save Japan Dolphins was present gathering media as upwards 80 pilot whales were slaughtered.Today science has proven that dolphins are higher beings with brains as large as mans. This meant nothing to the 23 members of the “Osana Union” that hunt whales and dolphins. To them the pilot whales are no more than, “Gondo” a preferred species for eating. Mothers, babies, mercy is shown to none in the cove where the innocent blood of dolphins continues to flow. Last year a few of the babies were taken back out to sea and released a sure death sentence for young pilot whales. During the most recent slaughter on April 28, 2012 there were no reports of release from the friend. Another pod gone forever. Their song, their traditions gone forever.

Captive Pilot Whale in Taiji “She is an old soul”

As “A Friend of The Dolphins” points some of the unfortunate souls driven into the cove on April 28th were taken captive. They will be sold to dolphinariums, swim with dolphins, and marine parks like Sea World worldwide. The money obtained from the sale of these unfortunate pilot whales pays for drive fisheries to continue mercilessly killing dolphins. The message, “Don’t buy a ticket to a dolphin show!”

How to get involved. Join the movement! Save Japan Dolphins continues the battle to end this everyday. Learn more http://www.savejapandolphins.org/.

You can also join us on Facebook at Champions for Cetaceans

“A Friend to the Dolphins Watches Over the Cove”

Rest in peace to the individuals murdered in “The Cove” on April 28, 2012 thanks to “A friend to the dolphins” they will not be forgotten and their deaths will not go unrecognized.

2 thoughts on “A Friend to The Taiji Dolphins”