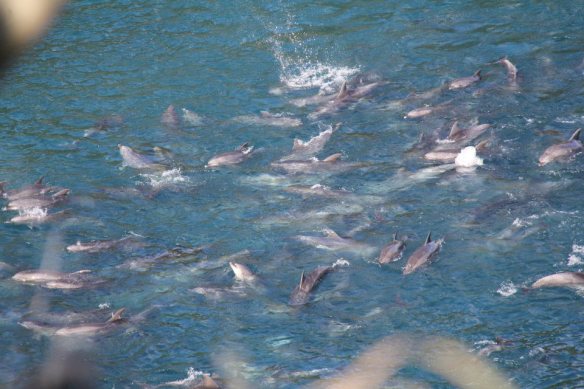 December 12, 2012 the Taiji dolphin hunters hit the jackpot!”Taiji: Huge pod of Bottlenose dolphins being driven toward the cove”(source)  And so the long cruel days ahead for the super pod of bottlenose dolphins began. It took the killers two trips to push the giant pod thick with calves and juveniles into the cove. The dolphin hunters had found the very thing that has lined their pockets with gold, the most desired dolphin by the captive industry bottlenose! It took all day to secure almost two hundred dolphins many of them mothers and calves. Once the task of herding and netting off the cove was complete the hunters left their victims  and the cove for the day: “Killers have left the cove after putting up nets- the Bottlenose Dolphins will remain in the cove tonight… December 12, 2012”. (source) Later a call to action was put out by the SSCS Cove Guardians to contact IMATA (International Marine Animal Trainers Association) and WAZA (World Association of Zoos and Aquariums) asking them to stop supporting the slaughter of dolphins in Taiji, Japan.

Taiji is the largest exporter of captive dolphins. Taiji dolphins are sent to aquariums, Marine Parks, swim with dolphins programs and facilities that are supported by both IMATA and WAZA. The captive dolphins taken in these drives often end up in dire situations as seen above.These two Taiji dolphins were shipped to Egypt where they have been placed in a tiny chlorinated pool underneath a stadium. They appear stressed and panicked. Their families, and the ocean have been taken from them forever. 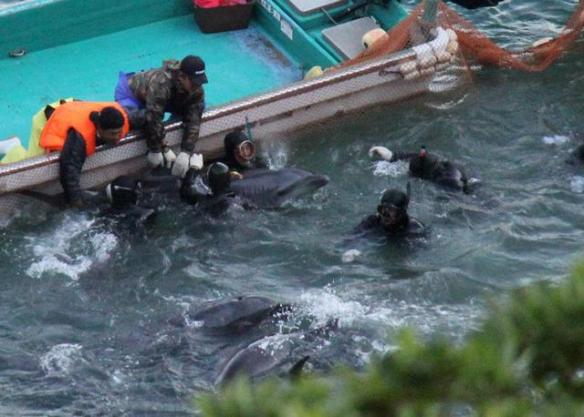 Day 2: Several dolphins entangled in the nets or were injured as the capture process continued.
By SSCS Cove Guardians December 13th, 2012

Day two was ugly as expected as families were torn apart and babies ripped from their mothers sides. Trainers and dolphin killers arrived in their skiffs early in the morning on December 13th. It would be a terrible and long day for the dolphins. Activists watched the Cove Guardians on livestream and Twitter  as they broadcast real-time directly from the cove. Sad reports of death and suffering continued to funnel in through-out the day: “Taiji: 16 dolphins captive so far. One calf died after being entangled in nets- its mother tried to save it before it disappeared”.(source)

The dolphin killers wrestled and pushed dolphins around the cove . Dolphins were caught in the nets as they tried to escape, many drowning while others that resisted were roped and dragged into the killing cove where killers and trainers waited for the selection process. December 13, 2012 was a long violent day in the cove for these dolphins. At the end of the day a total of 32 bottlenose dolphins had been selected.

Day three brought more suffering and violent captures. The super pod had now been three days with no food. By 11:30 am in Japan 28 dolphins had been taken: “Taiji: 28 dolphins have been taken so far today- 60 including yesterday’s”! (Source) As always in the cove dolphin death and suffering go hand in hand with capturing these highly intelligent beings: “Taiji: two dead bodies have just been found by divers and taken out from within the cove” (source)

Frenzied is the word that best describes the dolphin captures on day 5. The hunters continued to push the hungry and frantic dolphins from the netted area into to the killing cove where trainers waited under tarps for another day of selection. Each time the killers rushed into the netted areas with their skiffs the dolphins would dart into the nets in an attempt to gain their freedom. Sadly the killer know this game all to well. The killers dressed in diving suits dropped from the skiffs into the water with the dolphins in an attempt to keep the dolphins out of the nets and push them towards the killing cove. Dolphins that resist are roped by their fluke (tail) and dragged into the killing cove. Once under the tarps they are looked over for scars, and imperfections that deem them unsuitable for captivity. Only the most beautiful dolphins will be selected. A captive bottlenose dolphin that has been trained can bring upwards 150,000 dollars while a slaughtered dolphin only brings them around $600.00 to $700.00 per dolphin for their meat. Violent captures, usually followed by slaughter has lined the killers pockets yet the captive industry remains silence. At the end of the fifth day 31 dolphins were selected for captivity bringing the total to 93. “Nothing but greed, selfishness and profit” (Source) As the pod was left for yet another night activists could not help but tremble in thinking about all those still in the cove awaiting their fate on day 6 in the killing cove.

Please be a voice for the dolphins! There are still dolphins awaiting their fate in the cove. Take a moment and contact IMATA and WAZA. If they truly care about dolphins then they must speak up or retract their mission statements of conservation and caring.