Bottlenose dolphins have last moments together before being dragged to slaughter.
By SSCS C.G. January 20, 2013

“Blackfish” the new documentary about the captive industry being previewed at the Sundance Film Festival is making waves as it delves into the dark side of captivity. Marineparks are coming under scrutiny as it becomes more obvious everyday that captvity for dolphins is ultimately a death sentence with nothing but suffering along the way.

Taiji, Japan is a perfect example of a place marine parks do not want people to think, or know about. Every year Japanese dolphin hunters are given permits to hunt over 2000 dolphins. A portion are taken for captivity and the rest are slaughtered in the infamous killing cove. Made famous in 2009 when the academy award winning documentary The Cove was released revealing to the world where captivity begins.

In the cove killers and trainers many of them IMATA certified work side by side as the brutal captive process and slaughter takes place. During a recent pantropical dolphin drive several dolphins died during the selection process and one that was badly injured was returned to the killing cove and slaughtered with his pod mates.

“54-56 pantropical spotted dolphins were driven into the cove after fighting with everything they had to escape the killers. Trainers from all three captive facilities and killers selected 27 Spotted dolphins for a life in captivity, however, 2 of them died within minutes from the stress they incurred during the drive and selection process. In addition to those, 1 Spotted dolphin was injured so badly that as it left the cove with trainers, the skiff turned around and left the dolphin with killers for slaughter. The 26-28 left over Spotted dolphins were seen as unfit for captivity, but not the butcher house floor, as they were slaughtered at the hands of killers”. 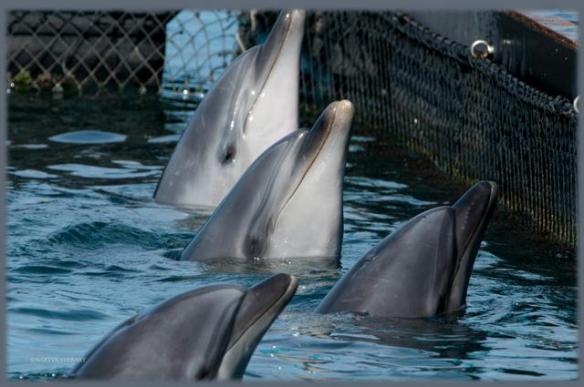 Many dolphins are kept in the tiny sea pens awaiting transport to Marineparks and Aquariums
By Martyn Stewart January 10, 2013

Taiji harbor, the Whale Museum, and Dolphin Base are loaded with captive dolphins. Each dolphin brings sells for about $150,000 trained and $38,000 untrained. These dolphins are then shipped worldwide. Many are shipped to China, Korea, and the Middle East. It is rumored that these countries can work as stopping points through which the dolphins are shipped to change place of origin.

A Taiji Dolphin at the Dubai Dolphinarium 2012

The Dubai dolphinarium openly purchases dolphins from the cruel Taiji dolphin drives. In addition, their trainers are IMATA certified. A list of marineparks, aquariums, dolphinariums that purchase Taiji dolphins can found here

Parks like SeaWorld claim to no longer stock using Taiji dolphins directly. Conversely, they do not oppose aquariums and marine parks that do.

“SeaWorld has apparently never taken any action against the drives themselves.

Their argument seems to go as follows: There’s nothing shameful about benetifing from a massacre that would still occur anyway, with or without the sale of certain traumatized animals lucky enough to be spared execution and dispatched to a faraway tank for fun and profit.

Three years ago, after the release of the Oscar-winning film The Cove,MSNBC reported that SeaWorld “refused to condemn those who still buy from Taiji.” Company spokesman Fred Jacobs, “likened such purchases to a salvage operation that prevents some animals from being killed.” (source)

A Taiji Dolphin at the Batumi aquarium 2012

Who is ultimately responsible for the dolphin suffering that takes place in Taiji, Japan? The marine parks and aquariums are complicit but what about the consumers? Everytime a consumer buys a ticket to any marine park world wide they support the slaughter of dolphins in Taiji. Captivity pays the bills. Without the support of the captive industry the slaughter would have died long ago. Those that eat dolphin numbers are few but the captive industry keeps the drive alive.

“No aquarium, no tank in a marineland, however spacious it may be, can begin to duplicate the conditions of the sea,” Jacques Cousteau once said. “And no dolphin who inhabits one of these aquariums or one of those marinelands can ever be considered normal.”

While lucrative captive industries continue to provide financial momentum, wild dolphins in Taiji and larger Japan will continue to lose their lives in barbaric drive hunts.

Pragmatically, however, it is up to patrons of dolphin shows to abstain from supporting marine mammal parks by accepting responsibility that their tickets pay a much larger price—and that price may be the life of a Taiji dolphin.

40 thoughts on “Dolphins Crying for Help: What Marine Parks Don’t Want You To Know”