USGS Woods Hole has requested a permit from the National Oceanic Atmospheric Administration/National Marine Fisheries Service (NOAA/NMFS) to incidentally “take” marine mammals while conducting seismic testing in the Gulf of Mexico (GOM) in search of natural gas for future harvesting. The area is densely populated with whales, dolphins and other species of sea life. Woods Hole states:

“Numerous species of marine mammals inhabit the GOM. Several of these species are listed as endangered under the U.S. Endangered Species Act (ESA): the sperm, North Atlantic right, humpback, sei, fin, and blue whales, and the West Indian manatee. Other ESA-listed species that could occur in the area are the endangered leatherback, hawksbill, green, and Kemp’s ridley turtles, and the threatened loggerhead turtle”. (Source, Page 1)

Numbers of requested cetacean “Takes” by level B harassment of marine mammals:

Note: There is no way that Woods Hole can guarantee there will be no incidents of injury and mortality.

Diagram of a Seismic Survey

The claim that seismic testing does not cause harm provided by Woods Hole is weak and outdated:

“The effects of sounds from air guns could include one or more of the following: tolerance, masking of natural sounds, behavioral disturbance, and at least in theory, temporary or permanent hearing impairment, or non-auditory physical or physiological effects (Richardson et al. 1995; Gordon et al. 2004; Nowacek et al. 2007; Southall et al. 2007). Permanent hearing impairment, in the unlikely event that it occurred, would constitute injury, but temporary threshold shift (TTS) is not an injury (Southall et al. 2007). Although the possibility cannot be entirely excluded, it is unlikely that the project would result in any cases of temporary or permanent hearing impairment, or any significant non-auditory physical or physiological effects. If marine mammals encounter the survey while it is underway, some behavioral disturbance could result, but this would be localized and short-term. As a result of the monitoring and mitigation measures, no marine mammals are expected to be exposed to sounds from the survey at levels causing behavioral disturbance”. (Source Page 16)

Although Woods Hole states the airguns will emit decibels between 160 and 190 dB the air guns are capable of reaching 230dB and can cause hearing damage,bleeding of the brain,behavioral issues,and strandings. The proposed permit would allow Woods Hole to run air guns in the two survey areas non stop for 96 hours at each location.  When a survey was suspended in 2012 in the same area Michael Jasny of Natural Resources Defense Council had this to say: “Imagine dynamite going off in your neighborhood for days, months on end,” said Michael Jasny, a senior policy analyst at the NRDC. That’s the situation these animals are facing.”(Source) Marine mammals depend on their sensitive hearing for survival. Hearing loss for a cetacean can mean inability to function, hunt, navigate and cause death.

Blue Voice was on the scene as 2800 dolphins continued to wash up on the beaches of North Peru.

Everyday more instances of injury and death due to seismic testing are being documented. While almost all oil and gas exploration companies deny harm to marine life can be caused by seismic testing non profit organizations and ocean advocates are compiling proof that in-fact seismic testing is deadly to marine life as can be seen in Peru in April of 2012 where 2800 dolphins washed ashore. Hardy Jones of Blue Voice.org working with Veterinarian Carlos Yaipén’s released these test results taken from viable dolphin tissue samples:

“We found that stranded dolphins had the following signs: a. Bleeding in the middle ear. b. Simple fracture and cracks in the middle ear (periodic) bones.c. Hemorrhage and bubbles in mandibular fat (where dolphins perceive incoming sounds) d. Massive invasion of air bubbles which displaced the normal tissue of vital organs such as lungs, liver, kidney, bladder and blood vessels.e. Pulmonary emphysema: air bubbles, bleeding and massive destruction of lung tissue” (Source) All of these symptoms concur with the effects of seismic testing on cetaceans: “What he has found is evidence of acoustical trauma leading to rapid ascent and decompression syndrome. In other words loud noises, produced repeatedly over a long period of time, startled the dolphins who raced for the surface and incurred what humans call the bends”.(Source) 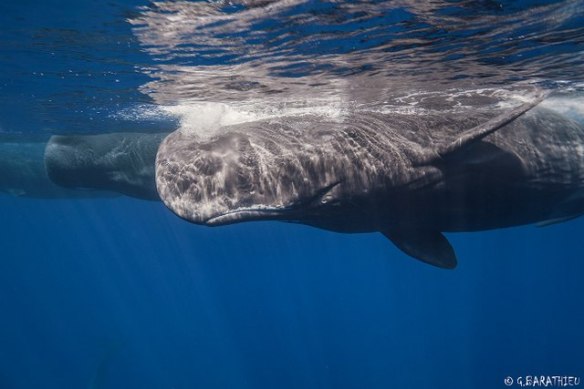 The sperm whale is just one of the species that will be exposed to 190-230 dB of explosive sound.

Be a voice for whales and dolphins:  Send your comments objecting to the issuance of a permit, and requesting a public hearing be held before the Marine Mammal Commission. Air guns producing 190 dB blasts underwater, for 96 hours at a time in areas densely populated with sea life is unacceptable. Let them know that their form of monitoring, “look outs” (people looking for marine mammals from the deck of the ship during the survey) is unacceptable as they can only see the surface of the ocean and: 1) while the air gun explosions will be as deep as 2000 meters. 2) Whales and dolphins spend most of their lives underwater.

You must submit your comments and objections to: