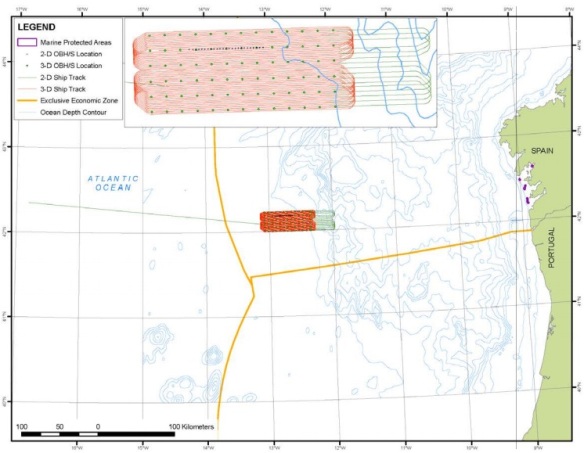 FIGURE 1. Location of the proposed seismic surveys and OBH/S instruments at the proposed study site in the northeast Atlantic Ocean during
June–July 2013, and marine protected areas in Spain.

The month of June thru July 12, 2013 promises death and destruction for dolphins, whales, and all the sea life in the Northeastern Atlantic ocean as a seismic survey takes place in a marine protected area. Lamont-Doherty Earth Observatory (L-DE) are planning to do a seismic survey with funding from the U.S. National Science Foundation to search for gas and oil deposits. This planned high energy seismic survey will take place  in International waters in and within the exclusive zone (EEZ) of Spain in water depths greater than 3000 meters or approximately 1 and 3/4 miles under the surface. The Marcus G. Langeth will be towing a 18 gun array of 160-190 Db of deadly sound. The intervals between blasts would be 15 seconds for 39 days without stopping. “Seismic airguns are used to find oil and gas deep underneath the ocean floor. Airguns are so loud that they disturb, injure or kill marine life, harm commercial fisheries, and disrupt coastal economies. These dynamite-like blasts—which are repeated every ten seconds, 24 hours a day, for days and weeks at a time—are 100,000 times more intense than a jet engine.  Seismic airgun testing currently being proposed in the Atlantic will injure 138,500 whales and dolphins and disturb millions more, according to government estimates”. 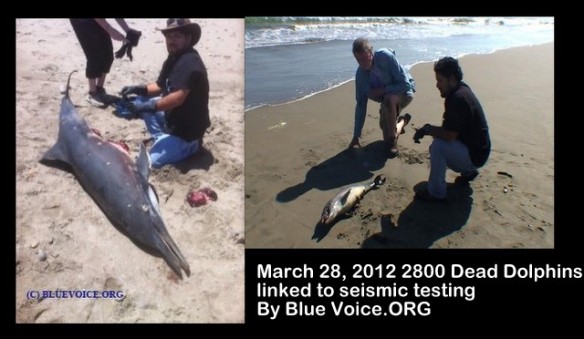 Every day more strandings and cetacean deaths are linked to seismic testing and sonar. In 2012 the deaths of 1000’s of dolphins off the coast of Peru was linked to acoustic trauma:

“The marine veterinarian, Carlos Yaipen-Llanos, who is president of the conservation group Orca Peru, said in an interview that necropsies that he and his colleagues performed on three separate expeditions indicated that the dolphins examined were bleeding in their middle ears and had suffered fractures there. They also had gas in their solid internal organs and severe acute pulmonary emphysema, symptoms consistent with death from decompression sickness — that is, the bends, he said.

“The animals died from decompression sickness caused by acoustic trauma,” he said” (source)

How a seismic test works

Listen to the sound of a seismic survey. Try to this explosion repeating every 15 seconds for over a month. Remember this survey has an 18 air gun array!

What can you do? Sign the petition created by Ted Danson and be a voice for dolphins, whales and all ocean life.

16 thoughts on “Atlantic Seismic Survey Promises Death and Devastation for Dolphins,Whales, and other Sea Life”