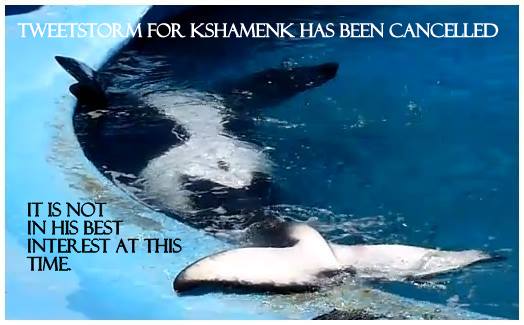 With the death of Dawn Branchau and the ensuing OSHA trials, first the publication of
“Death at Seaworld,” and then most recently the release of the documentary “Blackfish” Tillikum the captive bull orca has become famous. His life from a violent capture, years of mistreatment, to Dawn’s death, brought to light how terribly this highly intelligent bull orca had suffered in captivity, turning him into a psychotic killer. Orcas are the most social animals on the planet and have emotional centers in their brains larger than man’s. Male orca stay with their mothers for a lifetime swimming hundreds of miles, in tight-knit family units.

Thanks for your interest in Kshamenk and support.

Thanks to “Blackfish” the public lens is now focusing on orcas, known as killer whales. While Tillikum has been in the public eye for quite some time another bull orca has not. Kshamenk, often called the forgotten orca has a heartbreaking story of sadness and betrayal. “On September 19, 1992, Kshamenk was a young 4-5 year old orca “captured” off the coast of Argentina. Officially he was found stranded, but it is believed he was forced to strand by the Mundo Marino staff“(source). Today he performs several times a day, seven days a week in small pools, with two dolphins at the Marine Park “Mundo Marino” in Argentina. In addition, he is used as a sperm donar for SeaWorld.

Despite all these factors at this time new information has come to light leading us to believe that at the present time a tweetstorm is not the most effective way forward for Kshamenk. For this reason we need to cancel this event but thank you all for your wonderful support!

“I don’t think it is a good idea to keep putting pressure on Mundo Marino re: Kshamenk. We are already talking with the oceanarium directives to analyze how his life quality can be improved as the whale is not releasable (like I told you before) for various reasons. Kshamenk was collected when he was a 5 years old juvenile and has spent most of his life (21 years) in the same captive setting. He has become highly socialized with humans and is dependent on human interaction. Kshamenk has not had contact with any other orca since his female companion “Belen” died in February 2000. He formed a close bond with a female bottlenose dolphin (Floppy) shortly after Belen’s death, and the two have been held in the same pool ever since. They continue to be strongly associated, and according to the staff at Mundo Marino are never separated. After the 2006 health and behavior assessment, it was recommended by the experts that whatever decision is made concerning the future of the whale, “serious consideration should be given to moving his present pool companion Floppy, with him”. Basing on the assessment performed in 2006, his chance of surviving in the wild is poor. If Kshamenk is reintroduced into the wild, he may revert to a previous pattern of behaviour that may put him in danger such as begging for food or seeking human contact (resulting in, for example, Kshamenk being shot by fishermen or fed fish with hooks inside). We all agree that Kshamenk should be in a sea pen in the ocean and not inside a concrete pool. Holding Kshamenk in a sea pen would provide him with a larger and more complex environment and would allow him to engage in a variety of natural activities. As part of a legal process that started in 2002 in Argentina under the regulatory authority “Secretaria de Ambiente y Desarrollo Sustentable de la Nacion”, Wild Earth Foundation (WEF), Earth Island Institute (EII) and Free Willy Keiko Foundation (FWKF) assessed various locations along the Argentine coast as options for rehabilitation/retirement sites including the Caleta Valdés, which we found unsuitable because the dynamics of the cove and strong currents cannot provide the proper maintenance of a sea pen. EII, FWKF and WEF concluded that Kshamenk family was unknown, his home range was only presumed to extend from the area of capture and it was established that there was no data of any type regarding the orca found along the Mar del Tuyú coastline. In the recommendations that we submitted to the Argentine Government we considered that a transfer to semi-freedom ideally should be attempted near the stranding/capture point and that the project should involve the oceanarium staff who are familiar with Kshamenk. Unfortunately there aren’t any suitable and safe locations near the stranding/capture site that have enough protection to reduce the risk of damage to the sea pen environment by storms or other natural events (which can have unwanted consequences as an accidental release into the wild or even worse, the risk of accidental entanglement and drowning in the containment net). This is the reason why Kshamenk can’t be retired in a sea pen so the best option left is to upgrade his pool… although building a new pool is very expensive and due to the economical crisis in Argentina I don’t think it would be possible. Also, when I exchanged thoughts with my colleagues at EII and FWKF, they think it’s not a good idea to make them enlarge the pool or build a new one, because then, after Kshamenk dies, they will have a huge empty tank that they may want to fill with new animals… As you may realize Barbara, it is a lose-lose situation for Kshamenk. Because you are giving Mundo Marino a new excuse to file an export permit request, as Mundo Marino believes the only way to improve Kshamenk’s quality of life is to transfer him to a bigger pool at Sea World where he will be with other whales…. and I don’t think that Kshamenk being sold to Sea World is the goal that you and your activist friends want to accomplish. I understand that you all want to help Kshamenk, we also want the best for him but as we are professionals and have experience we can look at the big picture, so we are really cautious in our progress because we don’t want our actions to have unwanted consequences like the example of the big empty tank or pressure ending in what we have been blocking for the past 11 years: whales from Argentina exported to the US to improve sea world whales genetic pool”

3 thoughts on “TWEETSTORM! Kshamenk, The Forgotten Orca Has Been Cancelled.”