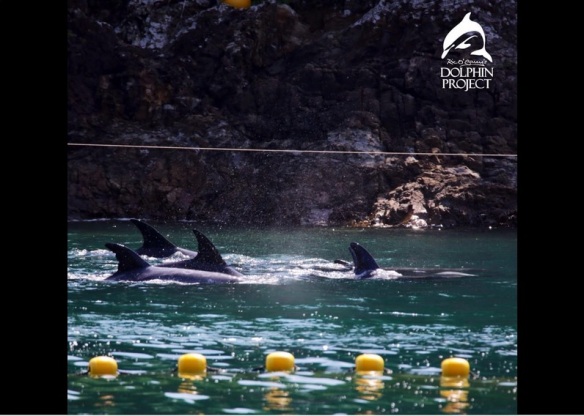 A pod of Risso’s Dolphins are the first victims of the Taiji Dolphin Hunting Season. by The Ric O’Barry Dolphin Project September 16, 2014 (September 15, US time)

The string of “blue cove days” ended September 16, 2014 as an innocent pod of Risso’s dolphins was driven into a remote cove in a state park in Taiji, Japan where a handful of men captured, and then slaughtered the entire pod. The yearly capture and slaughter of dolphins was made famous in 2009 when the documentary, “The Cove” was released revealing the inhumane and cruel treatment of these highly intelligent beings whose lives are destroyed for aquariums, food, and fertilizer. The hunt that takes place each year from September until March is brutal, grueling, cruel and deadly for the dolphin victims that attempt to travel past Taiji, Japan located in the Wakayama, Prefecture.

For several hours the  pod of Risso’s dolphins fought bravely for their lives but sadly they were no match for the hunters with their high powered Mercury engines and banger poles. The family was driven into the cove, pushed under the killing tarps, and then were quickly transported to the butchers house, the entrance known as “Death’s Door”.

In a CNBC interview Ric O’Barry discusses the roots of the drive ever growing capture for aquariums.

Ric O’Barry states that the “World Association of Zoos and Aquariums (WAZA) has the power to end this if they would stop these captures”. They must immediately expel the Japanese Association of Zoos and Aquariums (JAZA) responsible for blood dolphin trafficking. “They get as much as $154,000 dollars for one dolphin for an aquarium or marine park”. In a recent CNBC interview Ric O’Barry star of The Cove, and head of The Ric O’Barry Dolphin Project points out a graph that shows the slaughtered dolphin numbers dropping ( the meat is toxic only eaten by a few!) while captures for aquariums are increasing. Ric’s wish is to bring Carolyn Kennedy who spoke out against dolphin drive fisheries last season to come to “The Cove” and see first hand the terrible dolphin death and suffering that goes in Taiji, Japan and their strong ties to the captive industry.