Ken maintains that an underwater “blast” remains the mostly likely cause of death for the whale, who was known as Sooke — or Victoria, as Ken originally named her.

The comment period closes on April 15 for the Navy’s Proposed Actions in the Puget Sound.and the entire Northwest Training Complex.The Navy plans to add pier-side testing and maintenance, increased sonar practicing, and increased underwater charges and mines. While the Navy tries to minimize the impact of their activities Ken Balcomb senior scientist at The Center For Whale Research has actually heard, and seen the damage.

Please follow this link and read the Navy’s Proposed Plan HERE. Once you have read the proposed action you can then comment on the three deadly and important changes they are seeking. The ability to do pier-side sonar testing and maintenance one of the worst. An increase in sonar, and mines exercises and increase in underwater charges is unacceptable! 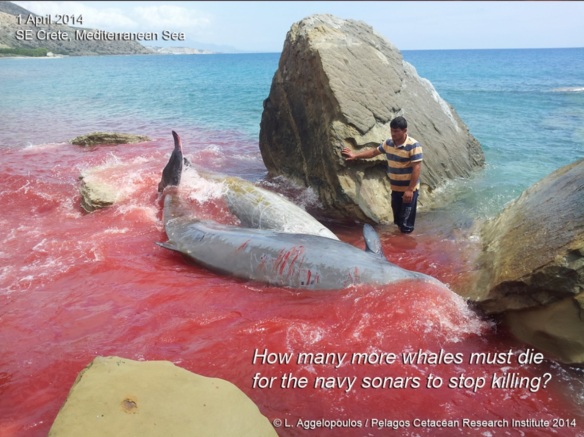 Last week, I wrote about a mass stranding of beaked whales off Crete while the Greek, U.S., and Israeli navies ran exercises offshore – the latest in a long line of whale strandings associated with naval training. At the time somewhere between five and eight whales were known to have beached along 20.6 kilometers of coastline west of Ierapetra.

“I am writing in opposition to the Navy’s proposed expansion of their Northwest Training Complex. I want to begin by opposing pier side sonar testing that would take place in an ESA listed habitat for resident orcas not to mention the many other cetaceans, marine mammals, and ocean life living close to the shorelines. Increasing these tests dock side is out of the question. There is no limit to the damage and deaths it will cause.

I also oppose and increase in underwater charges, increased war games using sonar, and explosion of underwater mines.
“Alternative 1 includes some activities that were not analyzed in previous documents. New activities being considered include:
“Use of new and existing unmanned vehicles and their acoustic sensors, in support of homeland security and anti-terrorism/force protection. This type of training is critical in protecting the nation’s military and civilian harbors, ports and shipping lanes.
Use of 0.50-caliber blanks in Puget Sound in support of force protection training of the Navy’s Maritime Expeditionary Security Force.
Addition of a biennial maritime homeland defense mine countermeasure training exercise in Puget Sound and analyzing the amount of time acoustic sensors are used during that event”.
All of the above expansions are unacceptable. I am supporting NO ACTION ALTERNATIVE and a slow departure of the Navy from the Puget Sound area and Pacific Northwest. It’s time to end the Navy’s war on whales”.

Please use the above information and compose your comment now opposing the Navy’s proposed action increasing their deadly activities in the Puget Sound!