By Alex Dorer of Fins and Fluke

. In November of 1979 off the coast of Ingólfshöfði, Iceland a young female orca,and three other pod members were violently captured, their lives changed forever:

She was captured in 1979 along with three others; King, Caren and another female who was unnamed. Kiska and the one female were sold to Marineland, in Niagara Falls, Ontario. The other female was then transferred to Kamogawa but died shortly after. Kiska was joined by Nootka V, Kandu VII and Junior. Kiska had five calves by Kandu VII; one died after 62 days by drowning, Kanuck lived for 4 years but died of traumatic shock and Nova who was born in 1996 and died in 2001 of pneumonia and starvation, in 1998 Hudson was born but died in 2004 of meningitis, and Athena born in 2004. After Kandu VII died on Christmas eve in 2005, Nootka V joined Kiska but tried to steal Athena away. During that time, Kiska was separated from her calf until Nootka died in 2008. She was then reunited with Athena and Marineland brought in Sea World’s Ikaika, also known as Ike to help with breeding. Ike and Athena got along until Athena’s death in 2009. Kiska is now alone, but retired from show as she is now 39 years of age. Probably one of the second oldest whales in captivity. Sea World and Marineland engaged in a nasty custody battle over Ike as he was on loan to Marineland for breeding but Sea World didn’t like the way he was being used and were also not impressed with the facilities. They won the battle and Ike is in San Diego as of November 2011. Kiska now remains alone, floating around the back pool of Friendship Cove(source)

Video obtained of Kiska by Alex Dorer of Fins and Fluke shows lone Kiska floating listlessly in her pool at the dilapidated Marine Park. Marineland is under scrutiny soley thanks to the Marineland Whistleblowers. In August of 2010 the Star began publishing a series of articles that would change history and the worlds view of Marine Parks forever as Phil Demers and other former trainers came forward exposing conditions of abuse and neglect at Marineland in Niagara Falls, Canada. The article, “Marineland animals suffering, former staffers say” by Linda Diebel, published Wednesday Aug 15, 2012 revealed what goes on behind closed doors, with example after example, complete with pictures of the terrible neglect and suffering.

Vote for Les Stroud Here at The Bille Celebrity Challenge!

Les Stroud and the Orca Conservancy have now come forward to support the Marineland Whistleblowers. Each day you can help by voting for Les Stroud  at the Bille Celebrity Challenge. By supporting the Whistleblowers we are supporting all the animals that continue to suffer at Marineland and that includes the lone orca Kiska. Alex Dorer of Fins and Fluke said it best: “Kiska, she needs us and the Whistle Blowers to keep fighting against Marineland so please vote for Les Stroud everyday”.

Les Stroud for Orca Conservancy is in 2nd place! Vote now, it only takes a second! http://celebcharitychallenge.org/

In August of 2010 the Star began publishing a series of articles that would change history and the worlds view of Marine Parks forever as Phil Demers and other former trainers came forward exposing conditions of abuse and neglect at Marineland in Niagara Falls, Canada. The article, “Marineland animals suffering, former staffers say” by Linda Diebel, published Wednesday Aug 15, 2012 revealed what goes on behind closed doors, with example after example, complete with pictures of the terrible neglect and suffering. The articles infuriated animal activists and environmentalists world-wide. Since the articles were published there have been two protests demanding the dilapidated Marine Park be permanently closed.

In her article, “Marineland Conditions for Killer Whale Still Substandard – Video of Kiska the Orca“, Candace Calloway Whiting uses video of Kiska obtained by Alex Dorer of Fins and Fluke of Kiska floating listless and alone in her pool. Dorer described the situation as she sees it at Marineland and how important it is to support the Whistleblowers.

Marineland Canada is one of Ontario’s most popular tourist attractions. Until Phil Demers, a Marineland senior trainer, went public (via the Toronto Star) with how Marineland treats its animals, no one really knew about the horrific conditions in which those animals live and die. You can find the Star’s extensive investigation series into what goes on behind-the-scenes at Marineland here.
In response to Demer’s actions, Marineland and its owner, John Holer, fired and sued Christine Santos, who happens to be Demers’ girlfriend. And now Demers has been sued as well, AND he has been threatened with additional legal action as well. Demers and Santos now face crippling legal bills, just to defend themselves, and financial ruin if they can’t muster a legal defense. 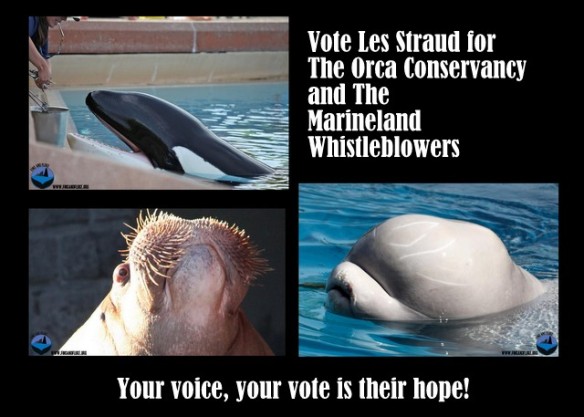 For more information on how you can help come to Fins and Fluke on Facebook. Start making a difference for these animals by supporting the Orca Conservancy and the Marineland Whistleblowers today!