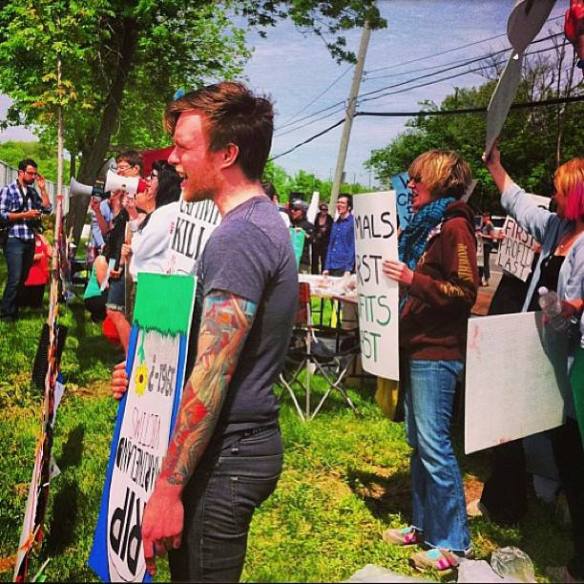 Marineland Protest May 18, 2013 by Lauren Corman

They gathered 1000 strong at Marineland on May 18, 2013 calling out for the notorious Marine Park to be shut down. In August of 2012 The Star began a series of articles exposing the cruel and neglectful treatment of animals as ex-trainers came forward, “Marineland animals suffering, former staff says”. Dolphins with peeling skin, sea lions blinded by poor water quality, and the eventual violent death of an infant beluga whale are only the tip of a very large iceberg of animal abuse. In December of 2012 the Star released yet another article revealing a secret mass animals grave yet even that would not be enough to “shut it down”. Sadly The OSPCA investigation ended in April of 2013 allowing Marineland to continue with business as usual. In the article, “OSPCA investigation ends as Marineland Complies with orders” states that many orders were given some of which involved Kiska the isolated killer whale:

He said in March the verbal orders were to assess and clean up the water and to enrich the environment of lone killer whale Kiska.

Marineland administrator Tracy Stewart said in an email at the time “there is no such thing as a ‘verbal order’ and consequently none were issued,” therefore, there were no orders on Kiska and the water system.

In the first paragraph of the Humane Societies academic paper “Killer Controversy why orca should not be kept in captivity” the author Naomi A. Rose, Ph.D. describes, orcas as intelligent and family-oriented. Orca pods in the wild stay together for a lifetime yet Kiska is kept in a tiny tank alone. Retired from performing she literally floats in a world poisoned by chlorine, devoid of family and friends, destined to spend her remaining years in the silence of  a cement pool. Never will she have a family or feel the rhythms of the ocean.

The good news is the battle continues. Following the protest event one of the organizers Dylan Powell stated, ” I want people to understand how important these protests are at Marineland”. Each protest gains more supporters for the animals languishing at Marineland. While Kiska and the other animals continue to suffer with no end in sight the battle to save them carries on to “Shut It Down”.

Be a voice for those that cannot speak for themselves the animals! Join the campaign to end the captivity of animals at Marineland by joining the open Facebook group Marineland Animal Defense M.A.D. and follow on Twitter M.A.D. @marinelandAD.