By Kirsten Massebeau and Barbara Napoles

The Pithing Tool is used to sever the spine behind the blowhole a cruel and inhumane practice of slaughtering dolphins. An example can be seen in footage from Taiji hunters instructed by the Faroe Islanders in the slaughtering technique.

The suffering of highly intelligent beings has begun as the Faroe Grind Summer 2014 takes the lives of 13 long finned pilot whales, a large dolphin that migrates through the North Atlantic. The small family of whales was driven into the shores of Fuglafjørður a village on Eysturoy’s east coast in the Faroe Islands. Its name means “fjord of birds”. The village is at the edge of a bay and expands into the surrounding steep hills. Despite scientific findings that dolphins have large complex brains, languages, and cultures the terrible hunt continues.

The small pod of dolphins are only the beginning of grindadráps that will span the summer and into the early fall slaughtering 1000’s of the large dolphins many of whom are pregnant at this time of year as they migrate through the North Atlantic past the Faroe Islands. The species is IUCN Red Listed as Data deficient, the meat is toxic, and the killing method inhumane yet the slaughter of 1000’s continues. The world has spoken out against the grind with Disney Cruise Lines recently altering their summer dropping the Faroe Islands from their route:

“No information has been released as to the reasoning behind the schedule change, but it’s likely that passengers–many of which are traveling with children–would be disturbed to see the slaughter, which happens on the beaches and usually fills the harbor with red water. Animal rights advocates criticize hunts like these for being cruel and unnecessary, because the level of mercury in pilot whales makes them unfit for consumption”. 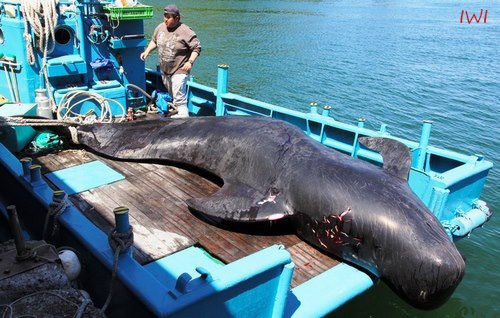 On May 1, 2013 the Taiji Fisherman  went back to work this time harpooning cetaceans at sea as reported by the International Wildlife Investigations:

1st landing of long finned pilot whale of the season in Taiji.

Event though the infamous dolphin drive hunt season has ended ( will resume on september 1st). On may 1st a new season of coastal whaling started for Taiji Fishermen, the next day the Masakazu Maru captained by Hoge Masashi went out and found this one about 10km offshore of Taiji.

Pay special attention to the marks next to it’s blowhole, this is how it was killed. We lack info on the technique used but “multiple stabbing/harpooning” is unlikely to provoke a quick death.

This long finned pilot whale was about 4.9 meters in length and weighted about  2 tons.

the quota for 28 whales is divided liked this :
– 8 long-finned pilot whale
– 10 Baird’s beaked whale
– 10 false killer whale
and is expected to be fulfilled. (Source)