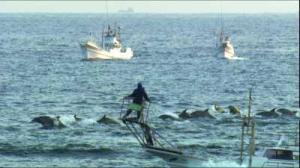 I visited the Sea Shepherd website for update on the dolphin, whale slaughter in Taiji. The Cove Guardians are so brave. Each day they have had to watch hundreds of dolphins murdered, and multiple captures for display. Babies watch as their mothers and fathers are hacked to death. They are then taken for captive display where they are drugged, electrocuted and beaten by their trainers. My heart cries out for the dolphin pods that are hacked to death by the dishonorable Taiji Fisherman. When will the Naoto Kan stop the senseless killing. At one time man didn’t realize how intelligent and gentle whales, dolphins, and porpoises are. Not to mention they are sonic beings that need to be in open waters to communicate and thrive. Tell Naoto Kan to bring honor back to Japan

by ending massacre of Dolphins in Taiji. Show the world Japan is not a backward country but evolved and civilized. Follow the link below and leave your message for Prime Minister Naoto Kan. Each message sent must be logged by Japanese government and an answer sent out so every comment counts!

I was moved to write this short piece after reading the Sea Shepherd Cove Guardians blog. They are so strong to be able to watch what is occurring in Taiji right now as I write this on February 20, 2011. I can’t imagine going to sleep knowing that in the morning you might have to watch 100’s of dolphins, their babies, and children brutally murdered by the cold-hearted Japanese Fisherman of Taiji. Please read their blog and support them anyway you can.

It is hard to feel proud to be human after watching such terrible footage.  My heart cries out for the families of the dolphins killed in Taiji.   These very intelligent sonic creatures deserve so much more from man. These are creatures that travel the worlds oceans in complex family pods communicating for hundreds of miles. They are self aware much like humans. Why the Japanese cannot appreciate, and leave alone the dolphins in the wild is mind boggling.The Japanese fisherman of Taiji and all of their supporters  put great shame on Japan by continuing a barbaric and cruel practice.

Ask Prime Minister Naoto Kan  to stop the dolphin slaughter in Taiji.today. Let him know we will boycott all things Japanese until they stop the senseless slaughter of the Taiji Dolphins. Let him know that eco-tourism is the answer not murder and captivity.

Just a minute of time can make a difference. One voice may not be listened to, but if many voices, continue to voice their opposition eventually the Japanese must give into the modern world and stop their barbaric practices of killing cetaceans, the gentle people of the sea.