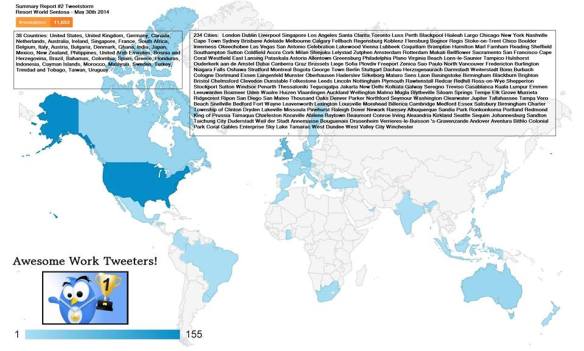 38 countries, 234 cities produced 11,653 tweets for release of the remaining 23 dolphins at the Resort World Sentosa slowly dying in captivity.

On May 13, 2014 it was reported that yet another dolphin has died from the original 27 dolphins captured and sold to Resort World Sentosa. Dolphin advocates joined forces, during a Tweetstorm organized by the Facebook page Save The Blood Dolphins. Barbara Napoles creator of Save The Blood Dolphins had this to say about her personal motivation for the Tweetstorm: “When I read that another dolphin had passed, once again I could not stand by and now with new our team of talented activists on Save The Blood Dolphins it was decided that those that enabled the export needed to be exposed”. Social media activists would turn out ten fold to produce 11,693 Tweets that continue to grow now topping at 122,690, exposing the terrible exploitation and treatment of endangered Indo-Pacific dolphins, captured for Resort World Sentosa in the Solomon Islands in 2007. Napoles also created a petition entitled: “Please Help Free the “Sentosa 23″ from Resort World in Sentosa Singapore”. Today the petition has 122,629 signatures gathering more and more signatures everyday. 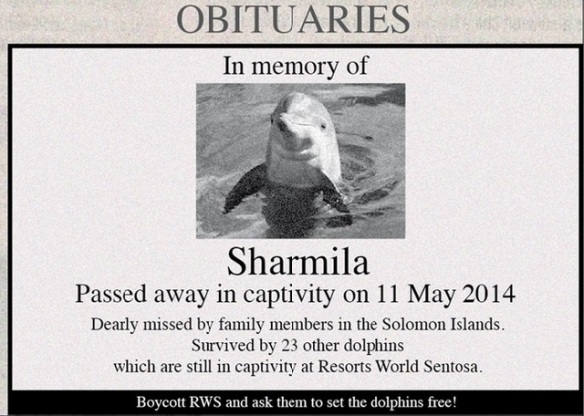 Please share this post in memory of Sharmila, Wen Wen and the other dolphins who have died, and to give a voice to the remaining wild-caught dolphins at Resorts World at Sentosa. Thank you to Kuan Eng for speaking up for Sharmila through the creation of this striking image.

Following the release of Sharmila’s death (ACRES) Singapore’s Animal Concerns Research and Education Society had this to say: “When is enough enough? Four have already died. Help speak up for the remaining 23 wild-caught dolphins. Urge Resorts World to work with ACRES toward rehabilitating and releasing them back into the vast open oceans.”(source) 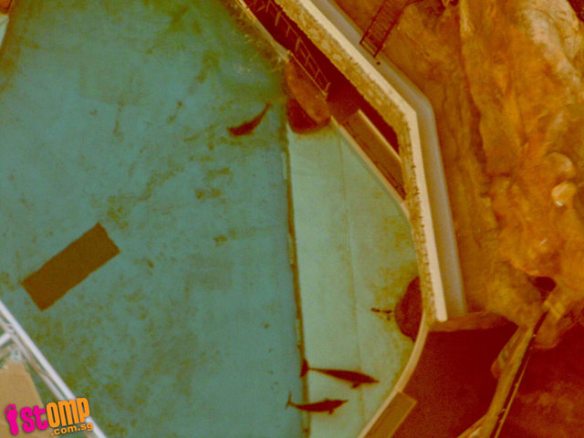 Poor, cramped, dirty conditions were exposed at Resort World Sentosa in 2013 by STOMP

Following Sharmila’s death, Resort World Sentosa had this to say: “We are conducting tests to confirm the exact cause of death. Prior medical tests indicated that she was healthy. We are closely monitoring all our animals, and as always, no effort or resources will be spared in ensuring the health and well-being of our dolphins at Dolphin Island,” (source) 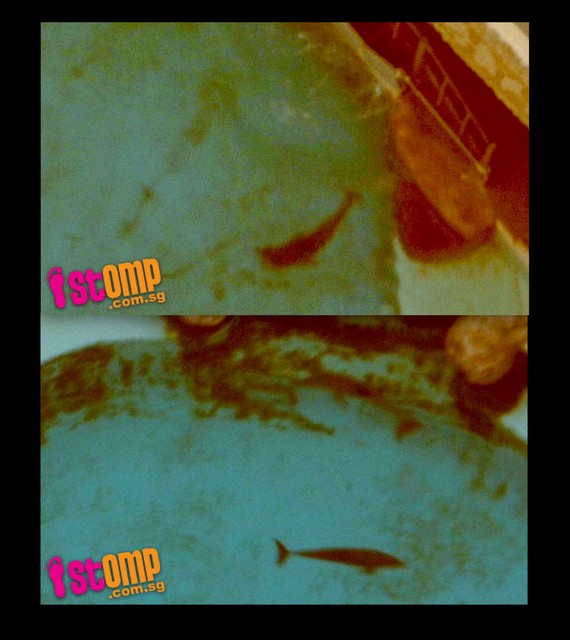 “For each pool, there were several dolphins crammed into a space not much bigger than a volleyball court. “In the second photo, two of the dolphins were not in the water, while another was knocking its head on the wall of the pool. “It was very heartrending to see them. “Related:Marine Life Park visitor ’embarrassed’ by blurry exhibits inside RWS oceanarium RWS dolphin dies en route to RWS Marine Life Park” (source) 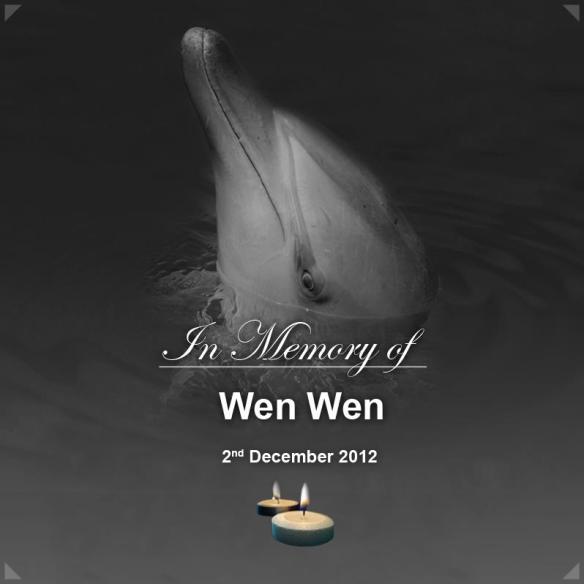 Wen Wen died while being transported from a dilapidated enclosure to Resort World Sentosa Singapore.

“Transport is traumatic: A dolphin’s body is not adapted to air temperatures or the effects of gravity on land. So when a dolphin is hoisted out of the water, he/she can overheat very quickly. And the sudden pressure of her own body weight over her inner organs can cause severe pain and sometimes permanent cramps all over its body. Imagine going through such agony for ten to twelve hours while being transported to a new water tank. These cramps can even make the dolphin incapable of moving when lowered back into the water, resulting in death by drowning”.(source) 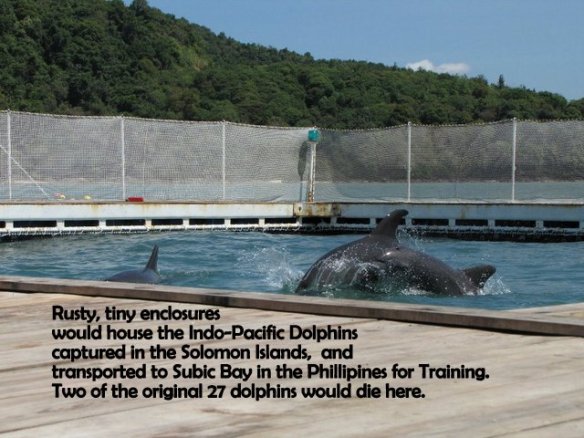 The original 27 dolphins were transported to tiny, rusty enclosure in Subic Bay in the Philippines. Two of the dolphins would die here.

“RWS has stated that they have “a world-class team of experienced professionals and animal experts” and it is their “mission to provide our animals with top-class care, and to treat them with respect.” They had obviously failed to live up to their promise… the wild-caught dolphins were housed for almost a year, in enclosures that were small and rusty. Two of them died here…”(source) 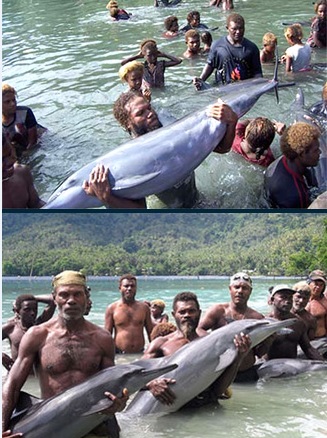 Things would change dramatically in 2003 as Marine Export Ltd. (MEL) would come to the Solomon Islands convincing islanders to capture dolphins for marine parks. 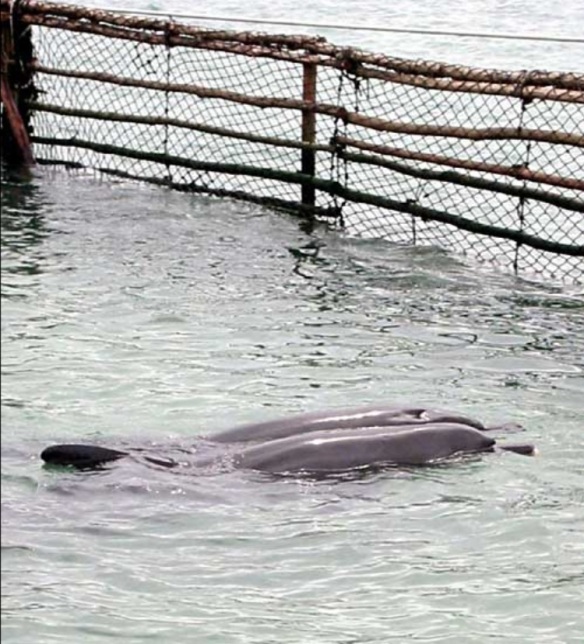 MEL kept the dolphins in a shallow, murky fenced off area that took many lives.

During the hunt, capture and confinement many wild dolphin lives would be lost as they were forced to live in shallow waters fenced off waters in murky waters fed dead fish: “The 2003 capture resulted in an illegal import to Mexico and a weakening of CITES (please see CSI’s web-archived October, 2003 Whales Alive!). Half of those dolphins in Mexico have died since then. Given the Solomon Islanders’ attitude towards this species of dolphin, it is very likely that many, many more died during the captures”.(source) 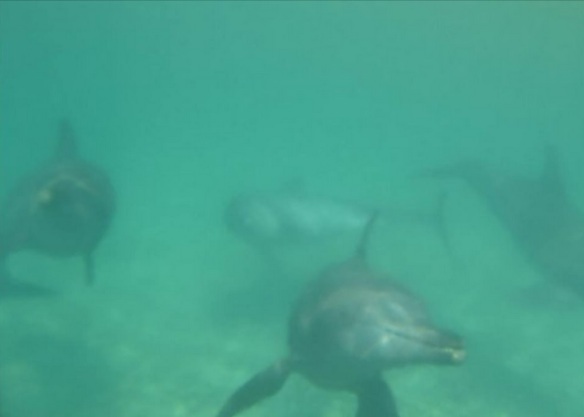 In 2007 Ocean Embassy/Wildlife International Network would come to the Solomon Islands to obtain dolphins for captive facilities. In 2007 William Rossiter opened his article, “Solomon Islands” saying this: “The Solomon Islands again attracted international condemnation in June when at least twenty newly-captured Indo-Pacific bottlenose dolphins, Tursiops aduncus, appeared in the infamous pens used in the brutal and exploitive 2003 dolphin capture”.(source) 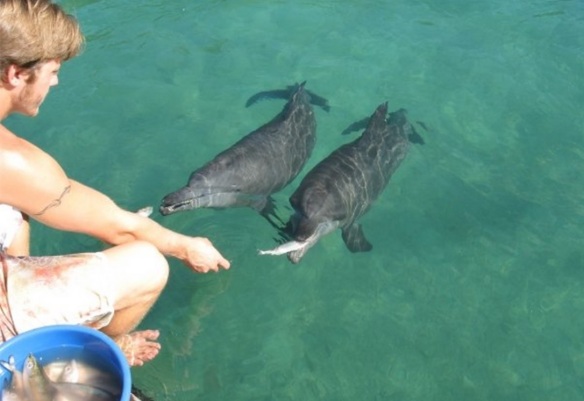 In 2007 Robin Friday Jr. and brother Chad were dispatched by Robin Friday the founder of Wildlife International Network and serves as the Chairman of the Board and Chief Executive Officer of Ocean Embassy, Inc. and Wildlife International Network, Inc. to prepare the wild caught newly-captured Indo-Pacific bottlenose dolphins, for sale and transport. The Ocean Embassy/WIN members quickly found ways to circumvent CITES and skewed population data to forward their plans of exportation: 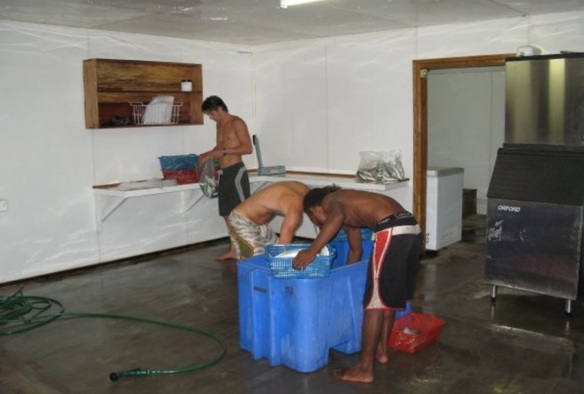 According the CSI whale the now powerful partnership Of Ocean Embassy/WIN found ways to again circumvent CITES and export dolphins: “In late June Porter, finally admitting what everyone knows, hired a U.S. scientist to get some data, albeit a little late. Porter’s MEL partners include Wildlife International Network Inc. (WIN), including Robin Friday, Mark Simmons, and Ted N. Turner, although Turner may have left. In Panama WIN calls itself “Ocean Embassy”, where their extremely controversial permit to capture 80 local dolphins for captive display and probable sale continues to fuel such a public fury that it might be on hold when you read this”.(source) 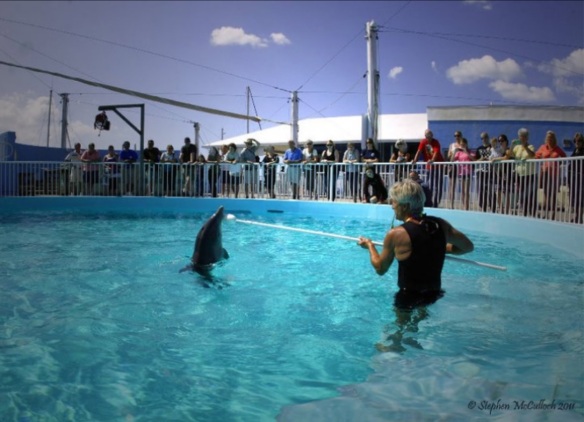 According to Ocean Embassy/ WIN the ex SeaWorld trainers plan to continue their plunder of the Solomon Island for dolphins despite the objections of islanders. They make it very clear their career as dolphin traffickers is ongoing and alive. These men believe themselves unstoppable: “We continue to see a future where limited dolphin exports, local dolphin population studies, new international zoological dolphin experiences and captive studies can result in a sustainable conservation and business initiative for the Solomon Islands”.(source)

It is easy to see why the death of yet another wild Indo-Pacific bottlenose dolphins motivated so many people to speak out by tweeting out 11,653 times. 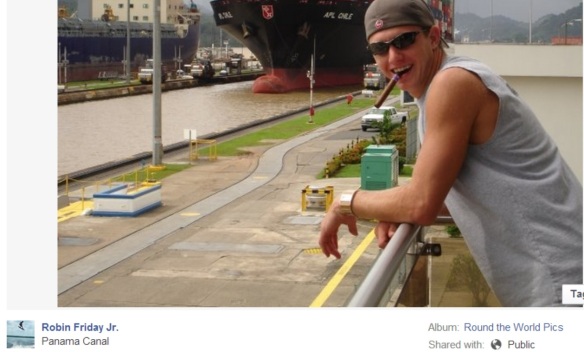 Robin Friday Jr. Panama Canal, around the world at the expense of wild Indo Pacific Dolphins?

Isn’t it time that organizations like Ocean Embassy/ WIN composed of ex SeaWorld, Marine Park trainers be exposed and stopped before more dolphins are ripped from their families and the oceans to line their pockets with gold.   The world must become aware that the captive industry is a business that will stop at nothing to make a profit. Ocean Embassy’s white washing of their activities behind training stranded dolphins and releases may fool non profits like Born Free who has not responded to our inquiries regarding their relationship with Robin Friday bur not true dolphin advocates who recognize cetaceans as free ranging, highly intelligent beings. (Robin Friday worked with Born Free to help with the release of Tom and Misha despite his history as a dolphin trafficker. Born Free has not yet commented on our inquiries). 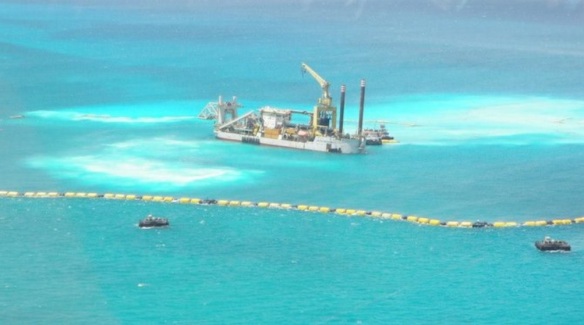 Resort World Sentosa also continues to show their real colors as they dredge Bimini destroying a critical habitat and coral reef to create yet another huge resort, that they most likely hope to populate with more wild dolphins obtained by their partners at Ocean Embassy/WIN. 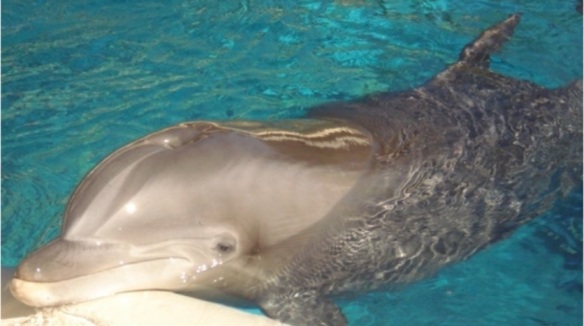 Join the fight to free the worlds Saddest Dolphins!!

While the Tweetstorm has ended, the fight to free the remaining 23 Indo-Pacific dolphins from Resort World Sentosa continues. Save The World’s Saddest Dolphins/ Acres offers petitions and ways to get involved on their website and Save the World’s Saddest Dolphins/ACRES on Facebook. Join us on Save the Blood Dolphins as we fight for the dolphins in trouble worldwide.    ‘