2020 a terrible year for the world, has continued to be horrific for cetaceans migrating along the Kuroshio current past Taiji, Japan. December a bloody month in Taiji would end the year with a female minke whale trapped in set nets owned by the cruel dolphin hunters of Taiji, OSANA fisheries. For 12 days the whale has circled, dove deep and fought for a way out of her terrible prison. Unlike other counties, and other areas of Japan, that rush to rescue whales from nets, that has not been the case in Taiji, Japan. She has been left to suffer, slowly starving to death.

Ren Nabuki of LIA has fought to free the whale, arguing with the dolphin hunters who have simply refused to release her. As evidenced during 2020 and years passed they simply lack empathy of any kind. While this female whale has been left to die this year the hunters have demonstrated a new voracity for cruelty with dolphins as the pods of dolphins have become more depleted with each new year. Barbara Napoles of Save the Blood Dolphins has often said, “They won’t stop until they have killed or captured every dolphin.” Undoubtedly this includes any whale misfortunate enough to wander too close to Taiji.

The dolphin killers have slaughtered the juvenile minke they have had trapped in the nets since the end of December. They went out early this morning and slaughtered her at sea.

The propensity of the dolphin killers for cruelty is a constant of the Osana dolphin hunters that run the town of Taiji. It is a terrible place that will always represent cruelty towards dolphins and other ocean beings. These men do not show respect for the ocean and her children. It is for that the world will remember the monsters of Taiji. 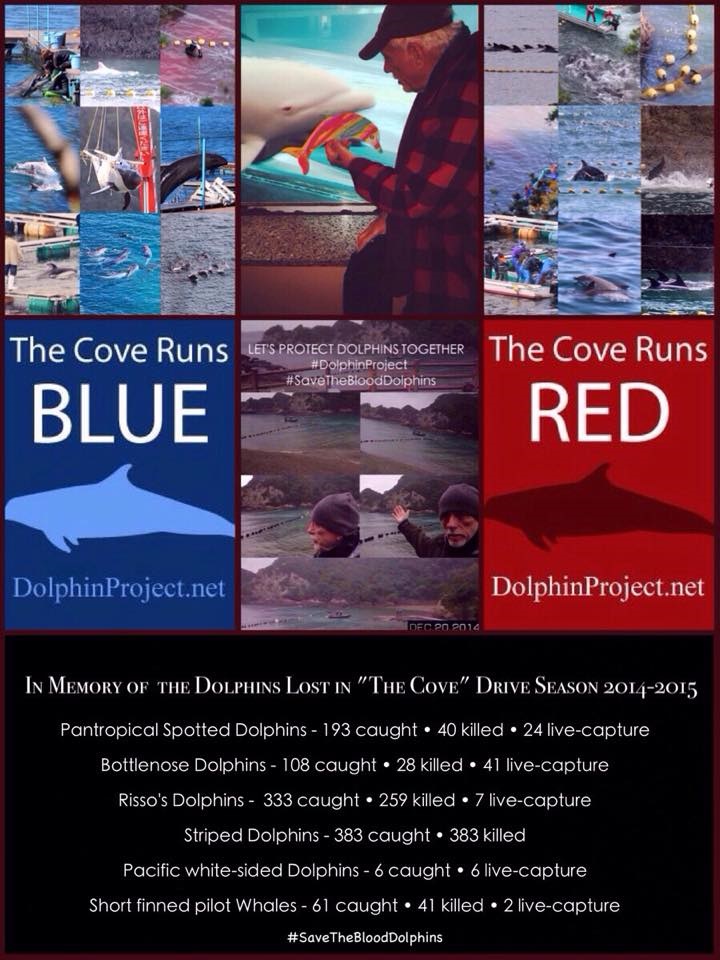 As another year of the Taiji dolphin drive hunting season ends dolphin activists worldwide take time for reflection as they contemplate and remember dolphins families and victims lost since September 1st.

Dolphin travelers migrating North will find the Kuroshio Current has a deadly “truck stop” known as Taiji. Only the lucky make it South in winter months.

Whilst the “False Killer Whale” has fallen from the roster of dolphin victims (none spotted since the 2011/2012 season) many other species of dolphin travelers going South on the Kuroshio Current were found by the dolphin hunters. 46 pods of dolphins were driven into the bloody killing cove of Taiji where they lost their children, liberty, history and their lives for aquariums, fertilizer, and human consumption.

The Victims of the 2014-2015 Taiji Dolphin Hunt Image Compiled By Takayo Yamaguchi. Sign the petition here.

The Risso’s dolphins would be seen as the dominate species driven into “The Cove” in 2014/2015 as the hunters went beyond their quota: 333 individuals were captured, 259 large adults slaughtered, only seven juveniles (children), were taken for marine parks, and 67 were dumped, or brutally driven back out to sea. The hunters took five over their quota for Risso’s dolphins. (source)

The striped dolphin a favorite food of the coastal area took the worst toll in terms of deaths. There was a quota of 450 for Striped Dolphins, of those 383 individuals were pushed into the cove. Of the 383 striped dolphins, not one was shown mercy or spared. No releases and no captures. Small pods, little families, with babies on board, and grandparents, would lose everything as they were pushed past hell’s gates to their deaths in Hatajiri Bay also known as “The Cove” a state park located in Taiji, Japan. (source)

Whilst the Japanese Fisheries would have the world believe that dolphins die instantly nothing is farther from the truth. In 2010 wildlife photographer Dieter Hagmann obtained secret footage of a slaughter during a striped dolphin drive. He captured the inhumane and slow slaughter of dolphins documenting what appeared to be death after struggling for 7 minutes. Because pithing begins with paralyzing the dolphin, and the bamboo nails inhibit the bleeding the suffering is extended. Some have estimated the dolphins still live for up to an hour or more as they are pithed at the cove and then transported to the butcher house where the dolphins are literally slaughtered and sold.

Cove Monitor, Karla Sanjur packs dolphin meat samples on ice for shipment to Tokyo to a lab for Radiation Testing.

The dolphin meat contains Mercury, PCB’s and Cesium-137 as documented by most recently by the the Ric O’Barry Dolphin Project:

The full results were as follows:

The mercury level is of concern. Even low-level mercury poisoning can have a substantial impact on human health because it bio-accumulates in the body over time. (source)

A violent live capture is of a bottlenose dolphin is underway as one dolphin is stuck in net.

The Fisherman’s Union responsible for the hunt numbers are few. There is little call for dolphin meat in a modern world. So how does the hunt survive?

According to The Ric O’Barry Dolphin Project: Dolphinariums that work together with the Japanese dolphin killers are a major reason that the dolphin massacres are still going on, and organizations such as the World Association of Zoos and Aquariums or WAZA, endorse the hunts by allowing members into their orgs who source dolphins from the drives. (source)

In 2009 the documentary staring Ric O’Barry was released exposing the horrific capture of dolphins and slaughter of the unwanted in Taiji, Japan.

Thanks to the academy award winning documentary, “The Cove” saving dolphins and whales from marine parks, captivity, and the slaughter it supports has become a worldwide movement that is growing each day. September 1st marked the opening of the hunt and events were held in Taiji and globally in opposition to the dolphin drive.

On January 15th the 5th Annual “Change for Taiji & Candle Vigil” Event took place in  in front of the Miami Japanese Consulate. Because of the captive industries close ties with dolphin drive fisheries to many the day was a moving demonstration of sadness, and hope that ended with a candle vigil.

Gone but Never Forgotten! The fight to save the people of the sea continues! 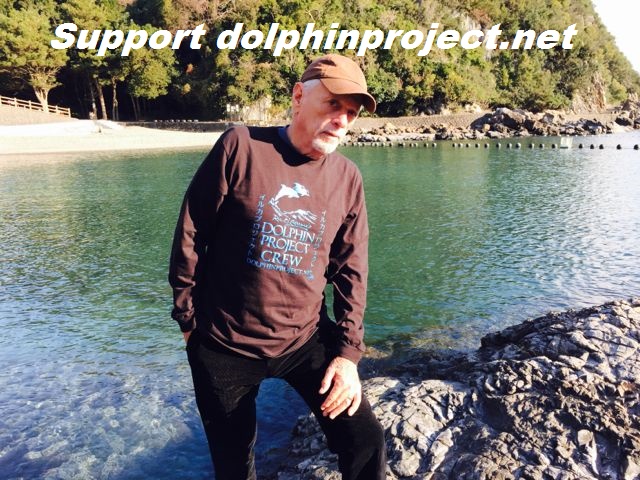 Support The Ric O’Barry Dolphin Project. net and make a difference for dolphins.

Be the change you want to see! Join and support  dolphinproject.net today!

Ric O’Barry personally spent a good part of this winter in Taiji monitoring and documenting the dolphin hunt and captive facilities foregoing holidays with family and events in his honor to stand watch for dolphins. He works 24/7 to be a voice for the dolphins in Taiji and in captivity. Where and when ever a dolphin needs help you will find Ric O’Barry.

“Ric O’Barry’s Dolphin Project has some phenomenal projects in the works — returning to the Solomon Islands, ending Indonesia’s traveling circus, Taiji of course, and Camp Lumba-Lumba — the first and largest permanent dolphin re-adaptation center in the world. Find ways to help here and become part of the pod here!.

Save the Blood Dolphins and Champions for Cetaceans Always Sharing Current news for dolphins, whales, ocean life, and ocean health.

Join us on Facebook pages Champions for Cetaceans and Save The Blood Dolphins for news and updates about dolphins and whales daily! Save the Blood Dolphins and Champions for Cetaceans always sharing current news for dolphins, whales, ocean life, and ocean health. Don’t forget to like our friends at I Love Dolphins another page with amazing updates and ways to take action for dolphins and the International Whale and Dolphin Stranding Network for current news on dolphin strandings worldwide.