On August 19 at 12 noon EST Dolphin Talk Radio will be interviewing Ric O’Barry star of, “The Cove” and director of the Ric O’Barry Dolphin Project. He will be discussing and taking questions on the dolphin drive in Taiji, Japan that begins September 1st, Japan Dolphins Day 2014, WAZA and JAZA’s involvement in Taiji, and the dolphins on display at the Mirage hotel in Las Vegas. Compose your questions for Ric, and be listening, and ready to call in when the lines open for questions! Please limit one question per caller. (424) 675-8287

“Ric O’Barry’s mission is to put an end to dolphin exploitation and slaughter once and for all. Dolphins are regularly captured, harassed, slaughtered and sold into captivity around the world – all in the name of profit. The Dolphin Project was founded In 1970, a group that aims to educate the public about captivity and, where feasible, free captive dolphins. O’Barry works not only to halt these slaughters in countries around the world, but also to rehabilitate captive dolphins, investigate and advocate for economic alternatives to dolphin slaughter exploitation, and to put a permanent end to dolphin captivity.

The Dolphin Project has achieved many important victories for dolphins over the years. We brought the world’s attention to brutal drive hunts taking place along the coast of Japan, as seen in the 2009 Academy Award-winning feature documentary “The Cove,” ; we successfully negotiated for an end to dolphin slaughter in the Solomon Islands; we and we continue to raise awareness that captivity is cruel.

Ric O’Barry has been working towards there goals for over 40 years, and he continues his quest to put an end to dolphin suffering. Be sure to stay tuned for information on how you can get involved and make a difference”. (Source, Dolphin Project Facebook) 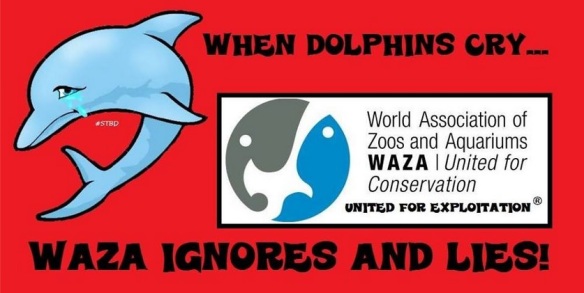 On March 28, 2014 Save the Blood Dolphins and dolphin advocates from all over the world, including Ric O’Barry star of “The Cove” and Director of the Ric O’Barry Dolphin Project, are planning a huge demonstration at The World Association of Zoos and Aquariums (WAZA) headquarters in Switzerland. The demonstrators are demanding WAZA end their silence and cut ties with the cruel dolphin drive fisheries in Taiji, Japan, and the captive industry that cannot sustain itself without the infusion of wild dolphins: “The number of dolphins bred in captivity does not replace the number that die. They suffer from high mortality rates, low breeding success and often endure physical and psychological disorders. Cetacea are frequently captured from the wild and sold into captivity.”(source)

“The goal of the World Association of Zoos and Aquariums is to guide, encourage and support the zoos, aquariums and like-minded organisations of the world in animal care and welfare, environmental education and global conservation.“(source)

Taiji: Another powerful image of Japanese activists and Ric O”Barry taking a stand at the Cove during bottlenose dolphin roundup.
9/1/13 by Ric O’Barry Dolphin Project

September is known as WAZA month. Bottlenose dolphins driven into the cove in September the first month of the drive will not be slaughtered if unwanted according to the WAZA protocol. Dolphin trainers, work side by side with the dolphin hunters of the ISANA Dolphin Hunters Union selecting the young most beautiful dolphins. In accordance with the WAZA dolphin protocol during the month of September the remaining pod of bottlenose dolphins are driven back out to sea a brutal process many dolphins do not survive. Despite WAZA proclaiming September aquaria month other small whales and dolphin species are in fact slaughtered during the month of September. 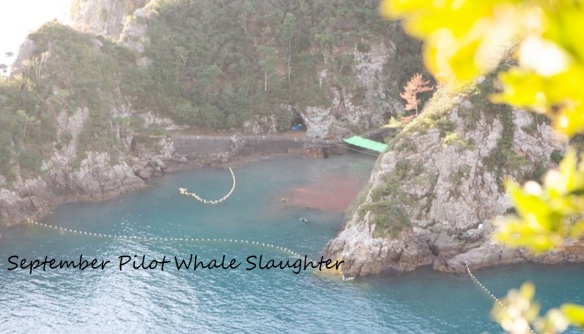 Even with the 2009 release of the academy award-winning film The Cove, and daily reports from advocates on the ground, the brutal dolphin drive continues with the capture for aquariums increasing every year:

“Although JAZA’s new policy may be portrayed as a step forward in addressing one element of the hunts (acquisition of live dolphins for captivity), we believe this policy will actually undermine dolphin protection in Japan. And because there is no enforcement or monitoring capability within WAZA, or JAZA for that matter, we believe this policy has more to do with providing public relations cover for WAZA by diverting focus away from Taiji and its dolphin slaughter”.(source)

Volunteer Cove Monitor Karla Sanjur and Richard O’Barry want to name the albino baby dolphin “Angel”. It likely will be placed on display like a freak show in captivity at the Taiji Whale Museum or some similar Japan aquarium. by The Ric O’Barry Dolphin Project

In January of 2014 the worlds eyes, including the people of Japan would turn to Taiji questioning the terrible suffering and it’s role supplying marine parks and aquariums. A large pod of approximately 200 to 250 bottlenose dolphins was driven into the cove by the Taiji dolphins hunters. Within the pod was a rare albino dolphin who clung to her mother as the hunters pushed section, after section of dolphins into the cove netting them off overnight. The following day would begin four days of manhandling, blood shed, and suffering as dolphin families were ripped apart, the children taken for lives marine parks and aquariums, the larger members slaughtered for fertilizer, and the unwanted brutally driven back out to sea. The albino baby was the first ripped from her mothers side and netted for captivity. Known as Angel the albino dolphin is now housed at the Taiji, Whale Museum where she was recently visited by Ric O’Barry. Learn more about Angel’s plight in Ric O’Barry’s Blog “An Angel in Hell”. 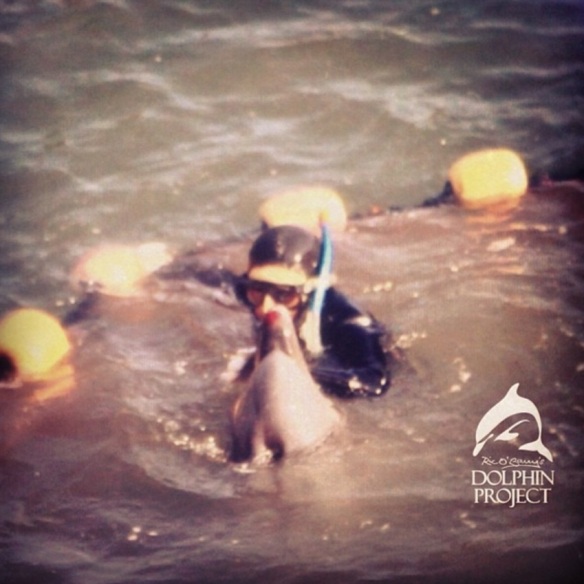 A dolphin is seen bleeding as he tries to escape from the nets. This is the sad truth behind the captivity industry. by The Ric O’Barry Dolphin Project January 17, 2014

The 2013/2014 drive season made it more apparent than ever that the captive industry is keeping the dolphin drive alive yet WAZA remains silent along with their sister organization, The Japanese Association of Zoos and Aquariums(JAZA), ironically on their board of Animal Welfare Committee, who continues to work closely with brokers of blood dolphins, The Taiji Whale Museum and Dolphin Base Resort who work directly with the ISANA Dolphin Hunters Union. 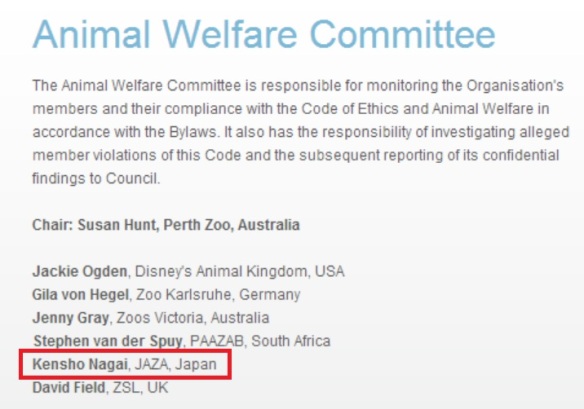 Taiji dolphin hunters continue to claim their hunt is “traditional” but several sources dispute this fact. In a recent editorial The Japan Times posted and editorial countering this claim:

Taiji: The killing of dolphins is neither quick nor humane.
10:25am January 28th by The Ric O’Barry Dolphin Project

“Tradition and culture are forces that change in accordance with new scientific understanding and evolving ethical standards. In addition, the Taiji hunt didn’t even become institutionalized on a large scale until 1969, so its roots are quite shallow.”(source) 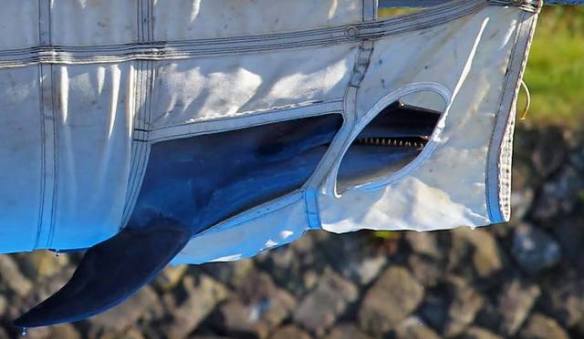 Bottlenose dolphin has been taken out of a pen, it has not survived capture. by the Ric O’Barry Dolphin Project November 25, 2013

“In a recent interview Ric O’Barry had this to say: “The number of dolphins caught last year for captivity was tremendous: about 250. The season before, only 50 dolphins were captured for captivity”.(Source)

Please join the event! Demonstration against the Japanese drive hunts and cetaceans in captivity – WAZA must put an end to these practices! Through its failure to act, WAZA is responsible for the genocide, capture and abuse of dolphins migrating past Taiji, Japan!